The news of one of the most respected composers of our time Ennio Morricone, has passed at 91 years. The Italian composer who was known for spaghetti westerns and some 500 films by a Who’s Who of international directors made him one of the world’s most versatile and influential creators of music for the modern cinema.

It was confirmed by his lawyer, Giorgio Assumma, at the hospital, who said that Mr. Morricone was admitted there last week after falling and fracturing a femur. Mr. Assumma also distributed a statement that Mr. Morricone had written himself, titled, “I, Ennio Morricone, am dead.”

Mr. Morricone won his first competitive Academy Award for his score for “The Hateful Eight,” an American western mystery thriller for which he also won a Golden Globe. In a career showered with honors, he had previously won an Oscar for lifetime achievement (2007) and was nominated for five other Academy Awards; in addition, he won two Golden Globes, four Grammys and dozens of international awards. 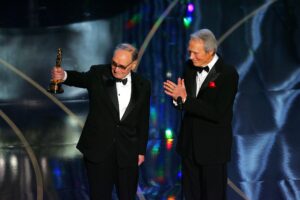 But the work that made him world famous, and that was best known to moviegoers, was his blend of music and sound effects for Sergio Leone’s so-called spaghetti westerns of the 1960s: a ticking pocket watch, a sign creaking in the wind, buzzing flies, a twanging Jew’s harp, haunting whistles, cracking whips, gunshots and a bizarre, wailing “ah-ee-ah-ee-ah,” played on a sweet potato-shaped wind instrument called an ocarina.

The trilogy’s Italian dialogue was dubbed for the English-speaking market, and the action was brooding and slow, with clichéd close-ups of gunfighters’ eyes. But Mr. Morricone, breaking the unwritten rule never to upstage actors with music, infused it all with wry sonic weirdness and melodramatic strains that many fans embraced with cultlike devotion and that critics called viscerally true to Mr. Leone’s vision of the Old

“In the films that established his reputation in the 1960s, the series of spaghetti westerns he scored for Mr. Leone, Mr. Morricone’s music is anything but a backdrop,” The New York Times critic Jon Pareles wrote in 2007. “It’s sometimes a conspirator, sometimes a lampoon, with tunes that are as vividly in the foreground as any of the actors’ faces.”

Mr. Morricone also scored Mr. Leone’s “Once Upon a Time in the West” (1968) and his Jewish gangster drama, “Once Upon a Time in America” (1984), both widely considered masterpieces. But he became most closely identified with “The Dollars Trilogy,” and in time grew weary of answering for their lowbrow sensibilities.

Asked by The Guardian in 2006 why “A Fistful of Dollars” had made such an impact, he said: “I don’t know. It’s the worst film Leone made and the worst score I did.”

“The Ecstasy of Gold,” the theme song for “The Good, the Bad and the Ugly,” was one of Mr. Morricone’s biggest hits. It was recorded by the cellist Yo-Yo Ma on a 2004 album of Mr. Morricone’s compositions and used in concert by two rock bands: as closing music for the Ramones and the introductory theme for Metallica. 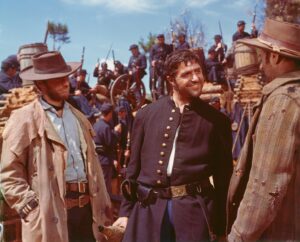 A scene from the Sergio Leone film “The Good, the Bad and the Ugly.” Its theme was one of Mr. Morricone’s biggest hits.Credit…MGM

Mr. Morricone looked professorial in bow ties and spectacles, with wisps of flyaway white hair. He sometimes holed up in his palazzo in Rome and wrote music for weeks on end, composing not at a piano but at a desk. He heard the music in his mind, he said, and wrote it in pencil on score paper for all orchestra parts.

He sometimes scored 20 or more films a year, often working only from a script before screening the rushes. Directors marveled at his range — tarantellas, psychedelic screeches, swelling love themes, tense passages of high drama, stately evocations of the 18th century or eerie dissonances of the 20th — and at the ingenuity of his silences: He was wary of too much music, of overloading an audience with emotions.

Mr. Morricone composed for television films and series, (some of his music was reused on “The Sopranos” and “The Simpsons”), wrote about 100 concert pieces, and orchestrated music for popular singers, including Joan Baez, Paul Anka and Anna Maria Quaini, the Italian star known as Mina.

Mr. Morricone never learned to speak English, never left Rome to compose, and for years refused to fly anywhere, though he eventually flew all over the world to conduct orchestras, sometimes performing his own compositions. While he wrote extensively for Hollywood, he did not visit the United States until 2007, when, at 78, he made a monthlong tour, punctuated by festivals of his films.

He gave concerts in New York at Radio City Music Hall and the United Nations, and he concluded the tour in Los Angeles, where he received an honorary Academy Award for lifetime achievement. The presenter, Clint Eastwood, roughly translated his acceptance speech from the Italian as the composer expressed “deep gratitude to all the directors who had faith in me.”

Ennio Morricone was born in Rome on Nov. 10, 1928, one of five children of Mario and Libera (Ridolfi) Morricone. His father, a trumpet player, taught him to read music and play various instruments. Ennio wrote his first compositions at 6. In 1940, he entered the National Academy of Santa Cecilia, where he studied trumpet, composition and direction.

His World War II experiences — hunger and the dangers of Rome as an “open city” under German and American armies — were reflected in some of his later work. After the war, he wrote music for radio; for Italy’s broadcasting service, RAI; and for singers under contract to RCA.

Mr. Morricone’s survivors include his wife, Maria Travia, whom he married in 1956 and cited when accepting his 2016 Oscar; four children, Marco, Alessandra, Andrea (a composer and conductor) and Giovanni; and four grandchildren.

Five Morricone scores nominated for Oscars displayed his virtuosity. In Mr. Malick’s “Days of Heaven” (1978), he captured a love triangle in the Texas Panhandle, circa 1916. For “The Mission” (1986), about an 18th-century Jesuit priest (Jeremy Irons) in the Brazilian rain forest, he wove the panpipe music of Indigenous people with that of a missionary party’s European instruments, playing out the cultural conflicts.

In “The Untouchables,” his music pounded out the struggle between Eliot Ness (Kevin Costner) and Al Capone (Robert De Niro) in Prohibition-era Chicago. In Mr. Levinson’s “Bugsy” (1991), about the mobster Bugsy Siegel (Warren Beatty), it was a medley for a star-struck sociopath in Hollywood. And in Mr. Tornatore’s “Malèna” (2000), he orchestrated the ordeals of a wartime Sicilian town as seen through the eyes of a boy obsessed with a beautiful lady.

Talking to Mr. Pareles, Mr. Morricone placed his acclaimed oeuvre in a modest perspective. “The notion that I am a composer who writes a lot of things is true on one hand and not true on the other hand,” he said. “Maybe my time is better organized than many other people’s. But compared to classical composers like Bach, Frescobaldi, Palestrina or Mozart, I would define myself as unemployed.”