Jaeger-LeCoultre is proud to be a sponsor of the San Sebastián Film Festival for fourth year. Each year, the Grande Maison gets more involved with the world of cinema and this year, to celebrate their fourth year of association with the festival, Jaeger-LeCoultre presented the charity project Instants of light, so children with cancer never lose their smile to help out the Fundación Aladina.

Instants of Light
On Friday 18th of September, the Swiss Manufacture Jaeger-LeCoultre and the Fundación Aladina held the press conference to present the Instants of Light charity project. Jaeger-LeCoultre’s Communication Executive Director, Laurent Vinay, as well as Paco Arango, president of the Fundación Aladina, attended the conference together with the directors and actors involved in the project.

Amin Salami, one of the children from the Fundación Aladina and who also stars in the short film directed by Gracia Querejeta also attended the press conference. 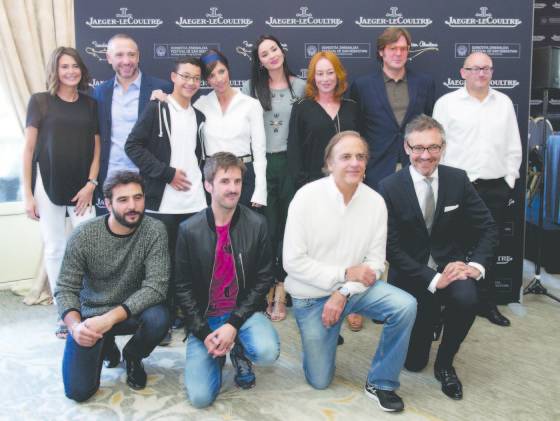 Opening night
That same night, the 63rd San Sebastian Film Festival began in the legendary Kursaal Center in San Sebastián. The night began with the Opening Gala, which took place in the Kursaal Center and was hosted by journalist and TV host Cayetana Guillén-Cuervo and the actress Mireia Gabilondo. After the Gala, Alejandro Amenabar premiered his new film Regression, staring Emma Watson and Ethan Hawke.

After the Gala, Jaeger-LeCoultre organized its annual Inauguration Party at the emblematic San Telmo Museum, in San Sebastián. The DJ Mickey Pavón and the violinist Pablo Navarro were in charge of music and entertainment during the party, where more than 800 guests attended. Amongst those guests were Alejandro Amenabar, Maribel Verdú, Antonio Velazquez, Dafne Fernandez, Alvaro Cervantes and many more. Instants of Light during the week
Many celebrities visited the VIP Lounge of Jaeger-LeCoultre at the Hotel Maria Cristina to support the charity project of the Grande Maison with Fundación Aladina: “Instants of light, so children with cancer never lose the smile.”

The actor Ricardo Darin, who presented the film Truman at the Festival did not hesitate to support this action and did so posing with a Jaeger-LeCoultre Master Ultra Thin Moon watch, novelty of 2015.

In addition, on September 21, the presentation of the nominees of the second installment of the Latin American Cinema Phoenix Awards took place. Ricardo Giraldo, director of Cinema23, actress Elena Anaya, Dolores Fonzi, Argentinian actress, Luis Tosar, Gabriel Ripstein, 600 miles Mexican director (film postulated by Mexico to the 2016 Oscar awards) and Marcia Tambutti, Chilean director of the documentary Allende, my grandfather Allende, announced the nominations for the 13 categories of the second installment of Latin American cinema Phoenix Awards, which will be held on November 25 at the Teatro de la Ciudad de Mexico “Esperanza Iris”. Closing Gala
On Saturday 26th, the closing gala of the Festival took place. Sparrow won the Golden Shell Awards for Best Film, while Ricardo Darín and Javier Cámara won the Silver Shell for Best Actor for their film Truman. Actor Rubén Ochandiano chose a Jaeger-LeCoultre Master Control Date watch to present the Horizons Awards, given to the film Paulina during the Closing Gala of the San Sebastian Film Festival. FESTIVAL DE SAN SEBASTIÁN
This year the Festival will be celebrating its 63rd consecutive edition with the same enthusiasm felt the day it first saw the light on September 21st, 1953. Conceived as an International Film Week for the purpose of screening and marketing films, it was not long before the IFFPA granted it B status (noncompetitive), thanks to the success of its first edition. A year later, it was called the International Film Festival, and in 1955, the IFFPA recognized the festival as competitive, specializing in color films. In 1957, the festival was granted « A » status and the Shell awarded in the main categories and determined by an international jury turned to gold. The list of personalities making an appearance at the Festival ever since its early days is endless. Their names have given San Sebastian Back its cosmopolitan splendor and have bestowed it with a certain dose of glamour, always connected to fine filmmaking. Finally, we cannot talk about the Festival without mentioning the city that has lent it’s now globally recognized character and images. San Sebastian plays an important part in the Festival’s devotion toward rediscovering cinema, turning both daylight and cityscapes into brilliant collaborators. Facades come alive with posters evolving different moments in the Festival’s history, with the Official Poster as the highlight.

Each year, this poster creates a special atmosphere.. Being one of the most welcoming cities in Europe, an enjoyable stay in San Sebastian is virtually guaranteed: go for walk along the city streets and delightful beaches, enjoy the excellent cuisine, and above all, take in some good cinema.