ACTORS AND DIRECTORS Dr Jekyll theatre gold coast by Caroline Russo | on September 16, 2022 | 0 comments | in Theatre | Like it 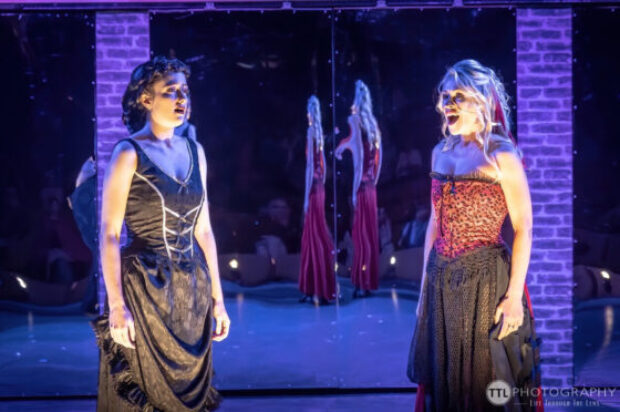 Conceived for the stage by Steve Cuden and Frank
Wildhorn

This Broadway musical adaptation of Robert Louis
Stevenson’s classic Gothic tale of the conflict
between good and evil in man has been a huge
worldwide success.
Now for the first time it is playing on the Gold
Coast.

The original novella was first published in 1886
and has been presented in many forms since,
including several film versions.
In 1997 the production team, including composer
Frank Wildhorn (who penned the Whitney
Houston hit Where Do Broken Hearts Go) and
lyricist Leslie Bricusse, who gave the world hit
musicals, including Doctor Doolittle and Willie
Wonka and the Chocolate Factory, brought the
musical to New York.
Jekyll & Hyde The Musical had its world premiere
in Houston, Texas, in 1990, but since the final
decade of the 20 th century has toured nationally in
the US and many countries around the world.
The first Australian stage production was at
Sydney’s Hayes Theatre in July- August this year,
but now GCLT president, Stuart Morgan, has
brought the production to the Coast and secured
his reputation as a first class director of large scale
shows.
Last Saturday’s opening was a triumph for Morgan
as director as well as the extensive ensemble and
highly skilled back stage crew. Morgan’s previous GCLT hits on this scale have
included Rodgers and Hammerstein’s The King
and I and Green Day’s American Idiot, which both
received a largely rapturous reception.
But this creative, who has been on the theatre
scene for 16 years, since he got the bug as a
backstage crew member in his home town, Wagga,
at the age of 16, couldn’t have done it without a
talented team.
The backstage credits go to Hayley Green
(choreographer), Ann Sparks (musical director)
and Ralph Lenton (stage manager) among others.
But it’s the on-stage performers, and the more than
two dozen songs, which captures the audience’s
imagination.
Artists such as Todd Jesson (Dr Henry Jekyll and
Edward Hyde), Chloe Smith (Emma Carrew) and
Cat Deller (Lucy Harris).
Stripped to its basics Jekyll & Hyde is a story of
love and hate expressed through this 19 th century
account of two women trapped in a battle for one
man’s soul.

Meanwhile, the two male characters – the
romantic gentle Dr Jekyll and the murderous Mr
Hyde – have their own demons to fight.
All three of the principals were in Green Day’s
American Idiot and brought something magical to
the stage both then and now.
However, the ensemble cast play a potpourri of
important roles as well as giving the large sound,
which features in songs such as the touching This
Is The Moment and the upbeat Bring on the Men.
To borrow an old theatrical and literary cliché this
is a show which works on many levels, but
probably the most important is a great night’s entertainment at the theatre.