John Butler to star at event for WA’s forests – showcasing acclaimed film Cry of the Forests. 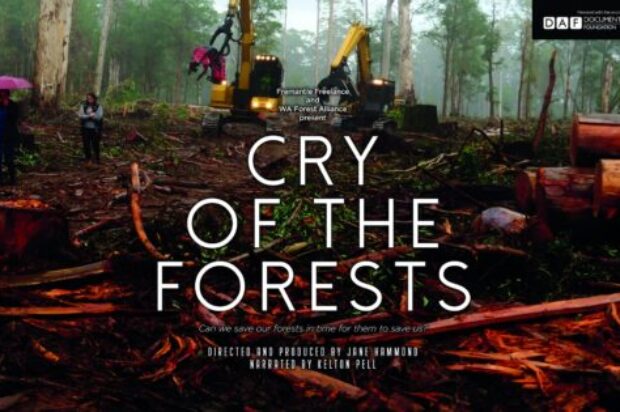 Tickets are selling fast for a special event in Manjimup on Saturday January 23 starting at 5pm, which will celebrate Western Australia’s unique forests.

The internationally renowned singer song writer will appear in concert ahead of an outdoor screening of the award-winning documentary Cry of the Forests at the Sandra Donovan Sound Shell in Heritage Park, Manjimup.

The alcohol-free, family-friendly event organised by the WA Forest Alliance, is designed to raise awareness about the ongoing devastation of WA’s South West forests, and their globally significant role in preventing dangerous climate change.

Cry of the Forests, released late last year, has been playing to full-houses in cinemas and community centres across the South West and the metropolitan area. It tells the story of the plight of WA’s forests and their real value in helping reduce WA’s skyrocketing carbon emissions.

She says interest from locals, day-trippers and holiday-makers is already very high.

“The January 23 event will be a memorable night with music by John Butler, The Nomadics, Lemon Myrtle, Chief Monkey, Not Just Charlie (Formidable Vegetable) and the Nannas’ Choir, followed by the film screening and a brief Q&A” she said.

“We are already feeling the impacts of climate change in the South West with our streams drying up and our rainfall diminishing,” he said.

“One of the easiest and most effective ways to mitigate the impacts of climate change is to end all native forest logging. Forests, especially old forests store huge amounts of carbon and draw carbon out of the atmosphere, yet we are still cutting them down for firewood, charcoal and wastepaper products.”

WAFA campaign director Jess Beckerling said Cry of the Forests shows without doubt that it’s time that WA completes the transition of the timber industry to plantations and farm forestry.

“WA’s South West forests are worth so much more to us all standing. Native forest logging operates at a financial loss in WA, meaning that we are actually paying for the destruction of critically important habitat and the loss of vital climate change mitigation through this wasteful and outdated industry.

“There is still absolutely a future for a local timber industry but it’s not in native forest logging. We support plantation and farm forestry and we have developed a plan that would see up to 960 new jobs created in a thriving expanded farm forestry sector,” said Ms Beckerling.

She hopes many Western Australians will visit Manjimup on Saturday 23rd January and book tickets to the special screening.

Tickets are available at online https://www.tickettailor.com/events/waforestalliance/467439