greek festival JOLLY BRIDGE QLD Official Paniyiri After Party PROJECTION WEST END BRISBANE by Caroline Russo | on May 18, 2018 | 0 comments | in Entertainment | Like it 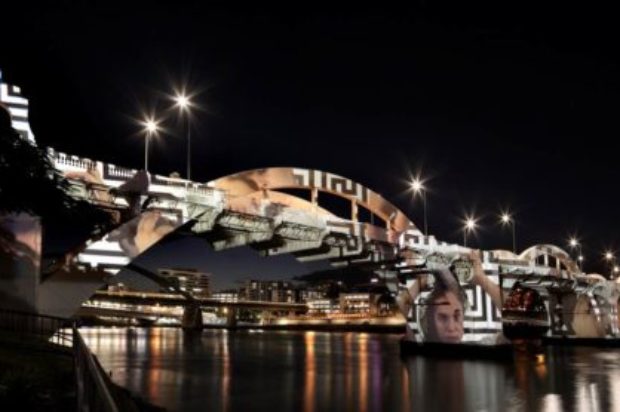 William Jolly Bridge got lit up last night with one amazing projection for this weekend’s Paniyiri Festival.
The artwork is by acclaimed artist and proud Greek, Michael Zavros, in a collaboration with by Brisbane City Council’s Urban Design Team.

ARTIST STATEMENT:
‘Caryatid was made to coincide with Brisbane’s Paniyiri festival and projected onto the bridge over a weekend celebrating all things ‘Greek’. It is temporary and ephemeral but references something permanent, something ‘set in stone’. The work is a collage of images of my children enacting classical Greek iconography and mythology. The repeated portrait is of my daughter Phoebe holding an Ionic capital aloft and references Caryatid sculptures in ancient Grecian architecture. My children are central to my broader practice, the subject matter of several recent portraits. The projection is also a reference to my Greek Australian heritage and my interest in the commodification and appropriation of classical iconography in popular culture.’ Michael Zavros

It’s Greek Week Brisbane – just five days until Paniyiri Greek Festival takes over the city in a haze of haloumi-flavoured smoke and Zorba-inspired high kicks!! And this year, all ticket holders can travel free on public transport to and from the event! Tickets are online at paniyiri.com!

LISTEN: Paniyiri stars a soundtrack of traditional and modern music starring the bouzouki, tarabuka, lira and laouto.
One of Australia’s leading bouzouki players in Nick Paras will perform, and the Kids Bouzouki Group will wow!

COOK: two AMAZING days of cooking demonstrations – upstairs on level 1 at The Greek Club and all FREE.
Some of the country’s best Greek cooks and chefs including the acclaimed Godmother of Greek cooking, Kathy Tsaples; Brisbane-based sisters Bernie Papagiannis and Annette Little from Spinach Leaf; local flavour-makers from The Fish Factory; Sam Demetriou from Cheeky Poke Bar; Brisbane-based siblings Danielle and George Diacos from Gertrude & Mabel and Little G; Lisa Peterson and Desi Carlos authors of Mediterranean Eating; and Helen Zeniou from Helen’s European Cuisine. PLUS this year we have Go Greek Cooking Workshops.

LOOK & LEARN SOME PRETTY INTERESTING STUFF: Works from acclaimed Greek-Australian painter and installation artist, Andrew Arnaoutopoulos, will be on display as part of the Cultural program.

TAKE A QUIET MOMENT: Explore the famed Greek Orthodox Church of St George – tours feature the traditions and ceremony of the Church with Byzantine chanting and Orthodox liturgy.

PLAY: The kids can get creative in the FREE Kids Zone area with art, craft and games as well as dance lessons with the Junior Hellenic Dancers Group. There will also be a reading of Melpomene and Andonis written by Greek Australian barrister Michele Kiosoglous and academic Phillippa Adgemis. PLUS, there’s a soccer workshop!

DANCE WITH THE STARS: Witness a great Greek dance-off with Channel Seven and Hit105 stars taking to the stage to compete for Paniyiri’s coveted title of Greek Dancing with the Stars.

MEET THE STARS: Home & Away stars Sophie Dillman and Patrick O’Connor, Issa Schultz from The Chase and Maryborough brothers, Josh and Brandon Jarius from House Rules will all make their Paniyiri debut cooking and coffee making, grape stomping, plate smashing, and Greek Dancing with the Stars.

EXPLORE: Most importantly, explore all corners of Paniyiri – you never know what you might find!

TRELLA: The Official Paniyiri After Party will pump with sounds from DJ Kossi as well as guest DJs at The Greek Club.

DID YOU KNOW:
In the 41 years of Paniyiri, almost two million festival-goers have devoured well over five million honey puffs, rivers of thick sweet coffees, over four million Souvlaki, 25 tonnes Haloumi and countless calamari and Dolmades. Only Zeus knows how many high kicks have been performed! Brisbane’s love of its famous Greek Festival knows few bounds! In 2018, festival goers are expected to down some 300,000 Honey Puffs, more than 100,000 Souvlakia, almost 12,000 Dolmades, 20,000 coffees, 1,600 kilograms of grilled Haloumi, 10,000 Shiftalies (Greek Cypriot sausage) and 1,000 kilograms of calamari.
Paniyiri is a community initiative of the 25,000-strong Greek community of South East Queensland. Funds raised are channelled back into the community via the Greek Orthodox Community of St George, Brisbane. It is Brisbane’s oldest Greek community established in the 1920s.