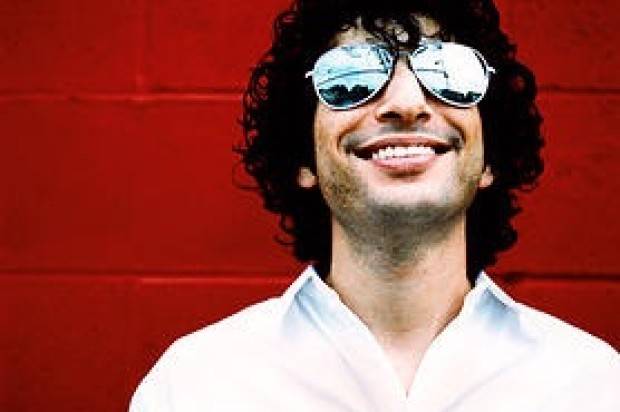 The guy was born to be a rock star and he makes the music to back it up.”
– Black Francis of The Pixies

“Baby, you’re a real motherfucker. And I mean that in the best sense of the word.”
– Neil Diamond

“He came to CBGB’s Gallery and ripped it up…The charm of it is that he’s brought it into his own thing… He does it with soul.”
– Jeff Buckley

Los Angeles, CA – April 13, 2015 – LA-based multi-instrumentalist, singer and songwriter, Jonny Polonsky has remained the world’s best kept secret – until now. Polonsky has announced that his highly anticipated upcoming LP, The Other Side of Midnight will be released on May 12th, 2015. Written and performed entirely by Polonsky and mixed by longtime Lynch collaborator/engineer, Dean Hurley (whose additional credits include artists: Zola Jesus, Moby, Duran Duran, Danzig, Chrysta Bell; and iconic film/television work including: Twin Peaks, Blue Velvet, Inland Empire) at David Lynch’s Asymmetrical Studios, Jonny Polonsky’s The Other Side of Midnight is 35 minutes of strange and beautiful, melodic, sci-fi bliss. For additional information, please visit: www.jonnypolonsky.net.

On the forthcoming album, Polonsky shares, “The Other Side of Midnight’ is the first record I’ve made since ‘Hi My Name is Jonny’ where I played all the instruments, and produced and recorded everything myself.” He continues, “Dean Hurley mixed it at David Lynch’s personal recording studio, Asymmetrical Studios, which was a huge thrill to me. I love David Lynch’s films and the music he makes. A LOT. My new record has a dark, watery, nighttime feel to it, and Dean helped to bring out those qualities BIG TIME. Plus I’m sure having Lynch mojo in the air didn’t hurt either…”

A teenager growing up in the Chicago suburbs just trying to get his music heard, Jonny Polonsky would stand outside venues and hand out homemade cassette tape demos under the name The Amazing Jonny Polonsky to musicians he admired. Eventually gaining the interest of Black Francis of The Pixies. Through Black’s influence, legendary producer Rick Rubin signed Polonsky to American Recordings and released his debut Hi My Name is Jonny in early 1996. The record was released to widespread glowing reviews, from the New York Times to MTV to music publications all across the globe. He and his live band supported Black Francis of The Pixies on a 12 week North American tour, and toured with the 1996 Lollapalooza tour for three weeks that summer, alongside artists including The Ramones, Devo, Rage Against The Machine, Soundgarden, The Melvins, Metallica, Cheap Trick, Violent Femmes, Wu Tang Clan, Rancid, Steve Earle and Ben Folds Five.

Polonsky has lived an entire lifetime over the past decade. After opening for Audioslave in 2005, and spending some time in a short-lived band with Brad Wilk and Tim Commerford of Rage Against The Machine/Audioslave called Big Nose, Polonsky met Maynard James Keenan of Tool, and became an integral part of Keenan’s performance project, Puscifer, writing, recording and touring with them for several years.

A restless creative, Polonsky has continued to work and release his own solo music throughout his numerous artistic endeavors. “The Other Side of Midnight” will be released on May 12th, 2015.

The Other Side of Midnight Tracklisting:

1. Chip Away The Stone
2. Lay Down Your Arms
3. Sunset Night
4. Waiting For Something
5. The Motherlode
6. Forever’s End
7. We Could Last Here Long
8. Going Home

Be sure to keep up with the band on their social networks: