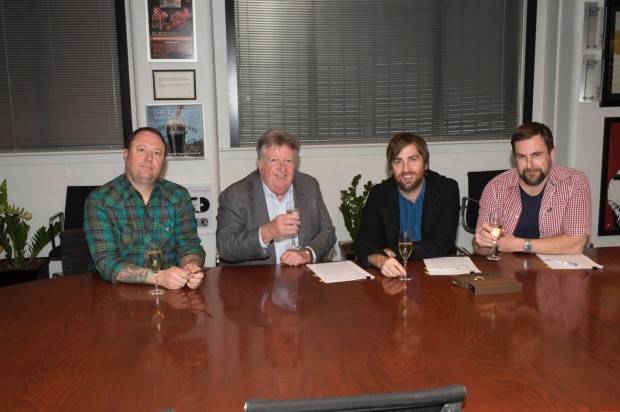 Josh Pyke, one of Australia’s favourite and hardest working singer/songwriters, has signed a record deal with the Wonderlick Recording Company, taking the next step in his recording career with the Sydney-based label.

Josh has been part of Wonderlick’s management roster since its establishment in 2007, with co-director Gregg Donovan managing the musician since 2003.

“I’ve been Josh’s manager for over a decade now and I still remember him as the young assistant at EMI Publishing pushing his demos on me when his boss wasn’t looking,” says Gregg.

“For Josh to trust us with his recording career as well as his management makes us feel all warm and fuzzy inside; it shows a lot of trust in Wonderlick.”

Wonderlick Recording is a joint venture with Sony Music Entertainment Australia. The joint venture label was established in 2012 and in a short time has a developed a great roster of Australian artists, including Holy Holy, The Paper Kites, Max & Bianca and Jackson McLaren.

Denis Handlin AM, Chairman & CEO Australia & New Zealand and President, Asia, Sony Music Entertainment, commented: “I am absolutely thrilled to be welcoming Josh into the Sony/Wonderlick family. I’ve been a long time admirer of his work. This is an incredibly important signing for us and further strengthens the growing roster of artists we have with the Wonderlick label.”

The partnership of Wonderlick and Josh has already seen him achieve so much as an artist, including the release of four top 10 albums, winning four ARIA Awards from 10 nominations, a J Award nomination and nine songs featuring in triple j Hottest 100 countdowns.

Further to his awards, Josh has completed multiple sold out national tours on top of performances throughout the UK and US, including shows at Glastonbury Festival and SXSW.

Beyond his musical endeavours, Josh is an ambassador for the City of Sydney Garage Sale Trail and the Indigenous Literacy Foundation (ILF).

He has recently reached his goal of raising $50,000 for the ILF through his Busking for Change charity event, which he has been holding for the past five-years.

In 2013, Josh founded the Josh Pyke Partnership, offering an unsigned musician the opportunity to receive mentorship and funding to help grow their career, in conjunction with APRA and Busking for Change.

The Wonderlick team is eager to transition its already close partnership with Josh into a fully-fledged collaboration of knowledge and talent.