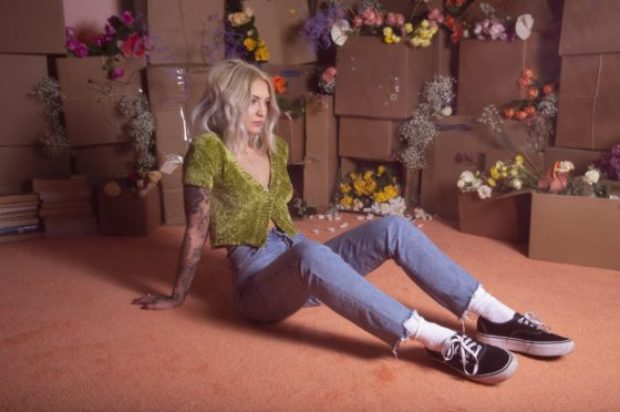 This month, Michaels is on tour with country superstar Keith Urban here in Australia, before returning to join P!nk on the U.S. leg of The Beautiful Trauma World Tour which began in March 2019. While in Australia, Julia has performed for Nova’s Red Room and is set to appear on [V] Island Parties January 30th.

The album includes the confessional and catchy “Anxiety” [with Selena Gomez]. An acoustic guitar bristles against her breathy delivery on vivid lyrics such as “My friends, they want to take me to the movies. I tell them to fuck off, I’m holding hands with my depression.”

At its heart, the song culminates on the undeniable synergy between JULIA and SELENA, making for a historic team-up between two of pop’s most poetic presences dealing with an identifiable subject…

“I wanted it to be a little satirical, because anxiety is typically such a dark topic,” she goes on. “It’s something that when you talk about it, you don’t talk about it with a smile. I guess it’s my way of trying to take my power back from anxiety. I’m like, ‘Yeah, it fucking sucks. I have it, but it’s fine’. Part of the reason it takes me so long to release music is I overthink everything and drive myself crazy. I’m beating that here too.”

JULIA publicly revealed her struggle with mental health last year, penning an intimate essay via Glamour that detailed her uphill battle with anxiety, particularly during the rapid rise of her debut single “Issues.” Read the essay HERE.

Elsewhere on INNER MONOLOGUE PART I, she and NIALL HORAN recall the ups and downs of a doomed relationship on the emotionally charged, yet sweetly nostalgic “What A Time.” Then, there’s “Into You,” which details the impossibility of letting go from an ex. “Happy” delivers something of a clarion call chorus that the world needs to hear, “I just want to be fucking happy!” Check out the full tracklisting below.

About the new project, she summed it up best—speaking straight from the heart as always.

“INNER MONOLOGUE PART I is literally my innermost thoughts and feelings,” she reveals. “This is my take on love, heartbreak, anxiety, and depression. A lot of the songs are sung as if I’m talking to myself or somebody else. I always try to be very conversational, because I feel like I’m trying to get everything out of my head, and this is the only way I know to do that. It’s been a long process to get here, but now was the right moment to do it. I think people could use it.”

They can also experience it live on her first-ever headline tour across North America, THE INNER MONOLOGUE TOUR. It launches on March 4 at House of Blues in Lake Buena Vista, FL, rolls throughout the country, and concludes May 10 at House of Blues Cleveland in Cleveland, OH. Tickets are on sale now at http://www.juliamichaelsofficial.com/.

JULIA is currently touring with country superstar Keith Urban in Australia, and will join P!nk on the U.S. leg of The Beautiful Trauma World Tour beginning March 2019.

In 2015, Julia Michaels transitioned from behind-the-scenes as a top songwriter for the likes of Justin Bieber and Selena Gomez into a force in her own right. As a solo act, she forged an unbreakable bond with countless fans worldwide and skyrocketed to the forefront of pop. She received 2018 GRAMMY® Award nominations in top categories such as “Best New Artist” and “Song of the Year” for her debut single “Issues” from the 2017 mini-album Nervous System. “Issues” went triple-platinum, crossed 1 billion global streams, achieved consumption of 10 million, emerged as “the top-selling debut single of 2017,” and scored a spot as the only solo female contribution on Variety’s “30 Most Consumed Songs of 2017” list.

Julia fired on all cylinders throughout 2018. Featuring on Clean Bandit’s “I Miss You,” she notched her first Top 10 on the Billboard Hot Dance/Electronic Songs Chart in addition to co-writing and lending her voice to Shawn Mendes’ “Like To Be You,” Lauv’s “There’s No Way,” and Noah Kahan’s “Hurt Somebody.” Julia also landed her first #1 at country radio with Keith Urban’s smash “Coming Home.” Not to mention, she wrote for everyone from Janelle Monàe and P!nk to Christina Aguilera and Jesse Ware as the year went on. Meanwhile, her solo single “Jump” [feat. Trippie Redd] cracked 100 million streams as she hit the stage at Jimmy Kimmel LIVE! and the Today Show Summer Concert Series to perform it. Along the way, she toured with the likes of Maroon 5, Keith Urban, Shawn Mendes, and Niall Horan. Most importantly though, these experiences prepared her for Inner Monologue Part I as she developed not only creatively, but personally as well.

TRACKLISTING
Anxiety with Selena Gomez
Into You
Happy
Deep
Apple
What A Time ft. Niall Horan