Justin Narayan Wins masterchef ten network by Caroline Russo | on July 13, 2021 | 0 comments | in Entertainment | Like it 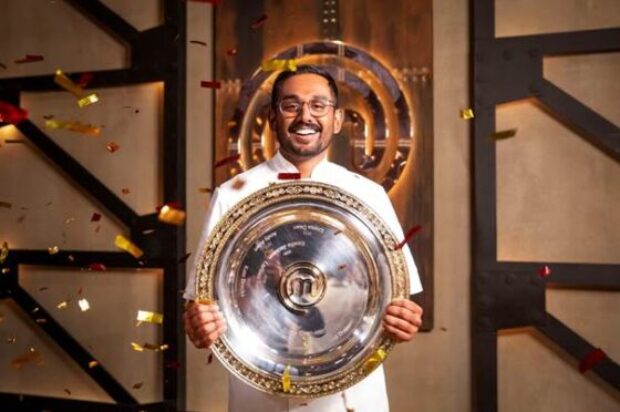 After cooking his heart out in a grand finale for the ages, Justin Narayan was awarded the title of MasterChef Australia 2021 and $250,000, beating fellow contestant Pete by a single point.

It was the final challenge in the MasterChef kitchen, and after a massive round one and two of the grand finale, Pete led the scoreboard with 53 points, closely followed by Kishwar on 51 and Justin on 50.

An epic round three pressure test was waiting for the contestants, with Peter Gilmore, the master of grand finale pressure tests on hand and a massive 80 points up for grabs.

It was revealed that the contestants would have five hours to cook two dishes simultaneously. There was savoury squid noodles, a shiitake custard and koji butter sauce dish from Peter’s restaurant Quay and a brand-new golden crackle dessert from his restaurant Bennelong.

Kishwar was first to be scored, receiving four eights (32/40) for her savoury dish. Pete received four nines (36/40) for his savoury dish, but it was Justin who landed the big numbers, perfect tens (40/40) for his incredible take on Peter Gilmore’s dish. The savoury scores put Justin in the lead on 90, followed by Pete on 89 and Kishwar on 83.

For the golden crackle dessert, Kishwar received eights from Andy, Melissa and Jock with a seven from Peter (31/40). Pete received nines from Andy, Peter and Jock, and an eight from Melissa, giving him a score of 35/40, and a total score of 124.

Justin needed 35 points to beat Pete’s final score. Jock awarded him an eight, before Andy and Peter revealed nines. Melissa was last to reveal her score, and with a triumphant nine (35/40), Justin achieved a total score of 125, claiming him the title of MasterChef Australia 2021 and $250,000.

For their incredible efforts, the judges announced that Pete would be awarded $30,000 as runner up, while Kishwar would take home $20,000.

When it was time to hand over the coveted MasterChef Australia trophy, Justin triumphantly raised it above his head to cheers and applause from the room.

Justin Narayan said: “I am just as surprised as you are right now! This has been the experience of a lifetime.

“I feel very honoured and humbled to hold this trophy, and I’m the first to admit that I didn’t get here on my own. I owe a lot to God, the crew, the judges, my fellow contestants, my friends, my family and my fiancé.

I’m not going to lie, I feel pretty blessed! I am keen to keep working hard and cooking up some good times, but for now, I’m going to enjoy this moment.”

MasterChef Australia.
Catch Up On 10 Play On Demand.