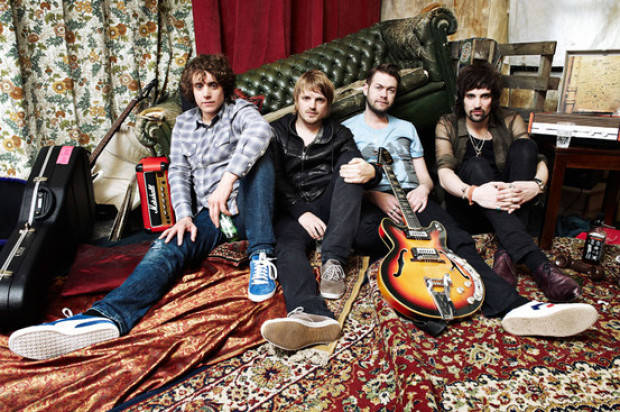 What is an album, but the sum of all its parts?
Kasabian’s refreshing new album ’48:13′ consists of 13 tracks, accumulating to a total running time of 48 minutes and 13 seconds.

The distinct sound and integrity of Kasabian’s fifth studio album defines the very essence of the band, their trademark sound distilled and re-packaged into one incredibly exciting, unique statement of intent.
’48:13’ is driven by the continuous evolution and musical experimentation of the band through their previous 4 albums, spanning a career which celebrates its 10th year with the release of this, their 5th album.

On writing and single-handedly producing the album, guitarist and vocalist Sergio Pizzorno commented: “I felt that we had the confidence to be more direct, more honest with this album. I started to strip away layers rather than to just keep adding.”

The band’s explosive frontman Tom Meighan is perhaps even more direct with his take on the record: “Less is more, you know? It’s direct. It is what it is. Just listen to it. We’ve had the confidence to lay ourselves bare. Serg has stripped it right back. It’s unbelievable.”

Pizzorno has always cited his 3 primary musical references as being electronic music, hip hop and late 60s guitar music; and there has never been a record coming closer to bringing the unexpected marriage of those genres into a singular vision. This is progressive music with roots.

1st single ‘Eez-eh’ shows just one end of the spectrum of possibilities showcased by Pizzorno’s song-writing and production. A relentless all-night tune which will doubtlessly ignite the moshpits of the band’s string of high-profile summer headlines, not least that of their much anticipated Sunday 29th of June night pyramid stage headline slot at this year’s Glastonbury festival, and of course the huge sold-out Leicester homecoming gig at Victoria Park on the previous weekend, June 21st.

The video for ‘Eez-eh’ was directed by the acclaimed artist and designer Aitor Throup, who has taken the role of Creative Director of the album, building a visual identity for the whole campaign. Throup’s highly conceptual approach reflects the direct nature of the music, which is evident in the constant and subversive use of bright pink and the focus on song running times, primarily seen in the album artwork he designed as well as in his stark photographic imagery of the band.