‘SETTING THE WORLD ON FIRE’ FEAT. P!NK TO BE COSMIC HALLELUJAH’S SECOND SINGLE

Having just dropped the new title – COSMIC HALLELUJAH – for his upcoming album, Kenny Chesney continues ratcheting up the excitement by releasing ‘Setting The World On Fire’ ft. P!nk to radio on the morning of Friday, July 29. The duet with triple Grammy-Award winning P!nk, captures the combustive euphoria of being on the brink of love and was recorded in part at Rick Rubin’s Malibu studio.

With a tumbling guitar part, clean percussion and pillowy synth pads, the mid-tempo song builds and recedes, featuring a stand-out electric guitar solo from Kenny Greenberg. Invoking the dazzle of being lost in the heart of Saturday night: lipstick on mirrors, philosophical conversations strewn across hours, bands on the speakers matching the name on your t-shirt, ‘Setting The World On Fire’ ft. P!nk is the wonder of how sweet and enervating falling into love can be.

“You can’t conjure a song that captures that feeling of being on the brink like this does,” Chesney says. “The lyrics are a perfect way of saying it, but when you feel that melody rise, the arrangement picking up momentum – it’s bigger than you are, and all you want to do is throw yourself against the night. Then when P!nk comes in, well, that just brings this (song) to life.”

Having made the decision to delay the follow-up to THE BIG REVIVAL, with its four straight U.S. No. 1s, including the Grammy-nominated ‘American Kids’, ‘Wild Child’ with Grace Potter and the life-affirming, three-week chart-topper ‘Save It For A Rainy Day’, Chesney’s hopes of having ‘Setting The World On Fire’ ft. P!nk as his next single were realised. For the 8-time Entertainer of the Year, it’s a song that embodies the very best part of what summer holds.

“With the SPREAD THE LOVE TOUR in full force,” the man The Wall Street Journal calls “The King of the Road” says, “I wanted a song that packs all that joy, all that fun, all the energy that love is made of. When I heard ‘Setting The World On Fire’, I knew it was exactly the song I’d been looking for. Like ‘Somewhere With You,’ there’s an urgency, but this one is ‘in’ the moment – and what a moment it is!”

Given Chesney’s history of unlikely – and often chart-topping – duets with Dave Matthews (‘I’m Alive’), the Wailers (‘Spread The Love’), Mac McAnally (‘Down The Road’), Grace Potter (‘You & Tequila’ & ‘Wild Child’) and six weeks at No. 1 with Uncle Kracker (‘When The Sun Goes Down’), teaming with P!nk continues his longstanding tradition of seeking the best collaborators in modern music.

“To me, great songs are great songs regardless of genre – and the core of being alive is the same no matter where you are,” Chesney says. “That rush of realizing there’s something going on here… You’re really clicking with someone… Or even just one of those perfect nights with your friends, there’s no feeling like it. And I like the idea of P!nk with her voice that is so strong and contains so many colours, she really makes that idea of giving into your heart, shouting out the window and whirling around in the middle of an abandoned street feel real.” 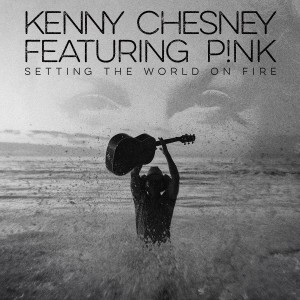