Celebrity car accident Hollywood actor in car crash Kevin Hart by Caroline Russo | on September 2, 2019 | 0 comments | in Daily News and Updates | Like it

Actor and comedian Kevin Hart has been injured in the crash of a vintage muscle car in the hills above Malibu, US.

Reports from the Police say the driver of the car was found pinned in his seat under the crushed roof and so was the female passenger. The fire department had to saw off the roof to free them as reported!
We’re also told the driver was airlifted across town to UCLA Medical Center. His condition and Kevin’s is unknown at this point. We’ve reached out to Kevin’s rep, but no word back yet as TMZ has reported.

The car accident happened just before 1 AM Sunday on the winding and treacherous Mulholland Highway.

The car smashed through wooden fencing along the roadside, and the roof was completely crushed by the impact
Earlier, on Saturday … Kevin posted a video of himself in his vintage ride, as someone yelled at him for laying down too much rubber on the street as he spun out his tires.

Kevin bought the car back in July as a 40th birthday gift to himself.

Damn just heard the news…Everybody say a prayer for @KevinHart4real! This was the scene of the crash 🙏🏿 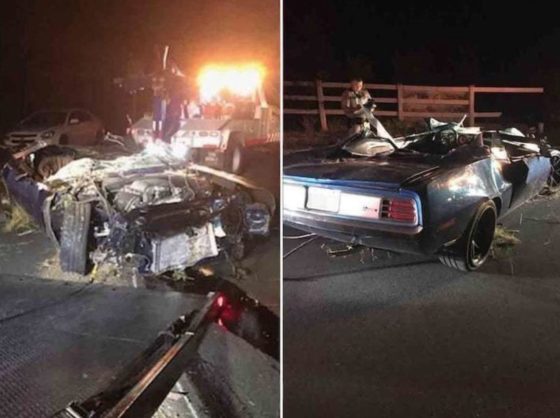