The Gold Coast event of the film and TV was well and truly transformed into the glitz and glamour of Hollywood at the kick starter event for the year for QLD Film & TV Events on the 10th of March at EAST Broadbeach.

The film industry came together in support of the kick-starter event. Guests had the opportunity to network and make connections with talented professionals of the trade; win prizes for best dressed and enjoy the fantastic Hollywood-inspired entertainment, choreographed by the talented Sarah Jane Jones who funds SJJ Creatives. Miss Jones, who has been a dance choreographer since she was 14. The opening was a well suited Hollywood number that got the evening going. 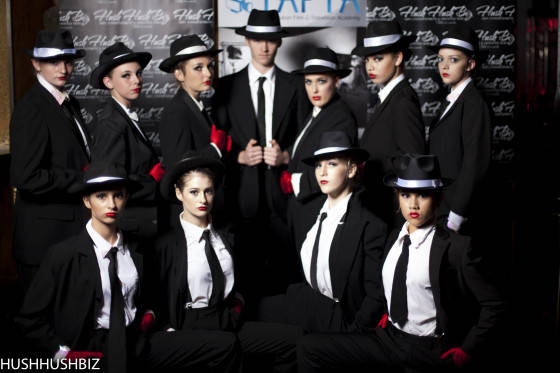 “The main inspiration for the closing routine of the Hollywood themed event was of course the king of pop himself, Michael Jackson,” Miss Jones said. “In my eyes, there is no one bigger than MJ and no one that symbolises Hollywood and music as much as he does. I grew up listening and dancing to him and Janet, so they’re both major influences in my work.”

John Stewart, who runs TAFTA (The Australian Film and Television Academy) on the Gold Coast stepped in as MC for the night, and made the night a memorable one for all. John had guests having to stifle their giggles, thanks to his quick wit and charisma, helped along with his donning of a pretty purple tutu and brown shiny boots.

The winners of the ‘best dressed’ were a matching white suit and top hat duo Lynn Santer and Herb Armstrong. Herb, who was born and bred in New Orleans, also happens to be the grandson of the highly renowned jazz trumpeter Louis Armstrong – (When the Saints Go Marching In/Baby, it’s Cold Outside) and the most famous song ‘What a Wonderful World’. Guests who attended ranged from young up-and-coming and aspiring actors to the likes of established producers and directors. The main speaker was director/producer/writer, Collin Budds. Budds has worked in the industry for over 45 years and has directed in TV shows such as Ship to Shore, Home and Away, H20:Just Add Water, Brothers and Sisters and The Flying Doctors – this list truly only scratches the surface of this brilliant individual. Guests on the night were fortunate enough to have the opportunity to listen and direct questions to Budds in relation to his work as a director. When asked what he looks for in an actor, Budds responded with somewhat unexpected answers for the guests. “I’m not looking for someone who is necessarily the best actor in the world,” he said. “What I’m looking for is someone who can stay in the moment, someone who can bring me a character, and of course honesty and integrity. This industry is not a 9 – 5 gig. You’ve got to really try hard. This is certainly not a career for the light-hearted.” The night also hosted the teaser trailer from the director/writer Robert Brainden’s low-budget, contemporary sci-fi/drama feature film ‘1’. ‘1’ is set to be shot in our very own back yard in South-East Queensland later this year. “‘1’ is the story of a man that sets out on a lone, dangerous journey to make amends for the life he has led. It is the ultimate human journey, one played out against the backdrop of the end of history. Yet amongst this devastation the man finds hope and the promise of forgiveness.” Leading cast actor who played in the main male role was Eric Cartwright and Niki J Price. QLD Film TV & Events, is organised by founder and presented by the industrious Caroline Russo. Caroline is looking forward to this year and to maintain regular events more so, and to hopefully work on submission of short film that are from the film schools, and other indie film makers. “Brisbane is where I like to present this more so, and then to look at arranging a film industry award festival towards the end of the year.”

The next big event is already in the planning pipeline, set to occur on May 5th and will definitely be one to save the date in your calendars for! For more info on the event and to go like the FB page or go to www.hushhushbiz.com