brisbane theatre Martin Luther QPAC by Caroline Russo | on March 6, 2014 | 0 comments | in On Centre Stage | Like it 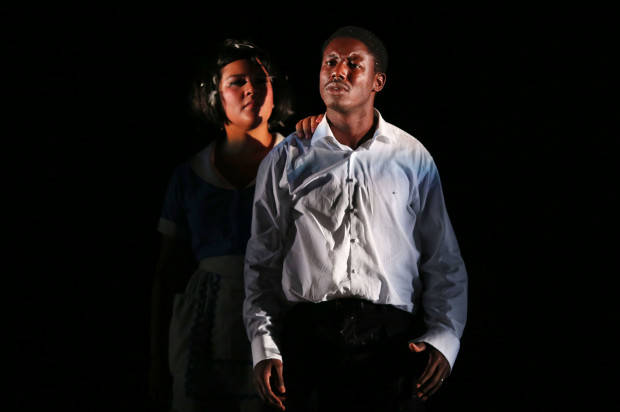 The Mountaintop by Katori Hall. Features Candy Bowers, Pacharo Mzembe. Directed by Todd MacDonald. Playhouse Theatre. Queensland Performing Arts Complex. Season until March 16.
Does US civil rights saint Martin Luther King Jr’s reputation take a bruising in Katori Hall’s The Mountaintop – is the king hit? – or does it just give the seemingly omnipotent oracle a human disposition?
There’s little doubting that great men – and women – have always had to live with the contrast between their public persona and their humanity.
We like our heroes to be diamonds but, of course, diamonds are flawed and ultimately, when the rain comes, it always falls harder in the middle of the square.
The Memphis playwright’s 2010 Olivier Award winning play, recently seen on Broadway with Samuel L. Jackson and Angela Bassett, goes behind closed doors on the last night of the great man’s life. It’s a rainy April 1968 night in Memphis when the head of the Civil Rights Movement checks into room 306 at the rather bleak downbeat Lorraine Motel.
The man himself, played by Mzembe, is world weary, and probably rather lonely as many exalted people on the road can be, so coffee and bed seem the order of the night.
That’s until the fiery, feisty, bold and brassy maid Camae (Bowers) comes into his lonely planet orbit like an unpredictable meteorite.
The next 90 minutes, without interval, is a bitter-sweet, funny, testy, sad and finally out of this world look at the man behind the myth.
Plus – he’s not picture perfect.
Therein lies the controversy.
It is an American star struck thing.
The idea Over There is that once you put someone on a pedestal it is undignified to look up their skirt and as for looking them in the honest eye? That’s a definite no-no.
So when US superstar and actor’s actor, Philip Seymour Hoffman died of a drug overdose at the age of 46 recently, Gilmore Girls star Jared Padalecki ‘stupid’ comment on Twitter caused a social media eruption worthy of Mt Vesuvius.He was covered in verbal trash.(I said something similar on twitter but luckily I live in a little hamlet called Obscurity Heights and belong to a lost tribe known as the Nobodies.)
The 31-year-old actor – sorry superstar – was, of course, right, but his immature sin was to speak too soon when feelings were running radish red raw.
However, King Jr, who died nearly 50 years ago at the age of 39, is now postage stamp and national holiday material, so alluding to his smoking, flirting, cursing and sometimes despairing ways has become a perennial taboo.
I don’t have any problems with the 30-year-old playwright’s commitment to the real world – I happen to believe that everyone who is born human probably is and death is the conclusive proof – but that wasn’t what fired up my enthusiasm for the play.
I found the first half – or maybe the first 30 minutes – was more So-So then Good God and it was the move into what’s been compared to as the Twilight Zone that proved to be most intriguing.
In the course of The Mountaintop – the title comes from his last speech, ‘I’ve been to the Mountaintop,’ – we get a surfeit of warts and all, but there’s the fantastical and the future as well.
The result is a marriage of mediums and we all know how rough that institution can be with its heady mix of best and worst of times.