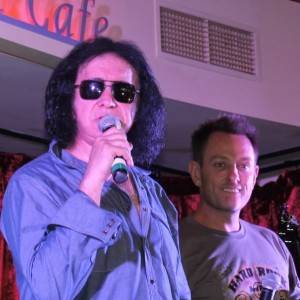 As part of Hard Rock’s commitment to delivering authentic experiences that rock, VIP’s and fans had a  rare opportunity to witness rock history as Gene donates one of his AXE bass guitars to Hard Rock’s world-famous memorabilia collection.

Mike Goldman was there to MC  the event and along with VIP’s and fans,  a bevy of local ‘Meter Maids’ beauties showed up.

Gene Simmons co-founded KISS 40 years ago and is better known as “The Demon.”  KISS continues to be the juggernaut of licensing/merchandising with over 2,500 licenses.  KISS has broken box office records set by the Beatles and Elvis Presley and continues stronger than ever.  KISS have been America’s number one gold record award winning group of all time (RIAA) with 40 million sales in the US and a total exceeding 100 million worldwide.  The KISS legacy continues to grow, generation after generation.  The unparalleled devotion and loyalty of the KISS Army to the ‘hottest band in the world’ is a striking testament to the bands unbreakable bond with its fans. 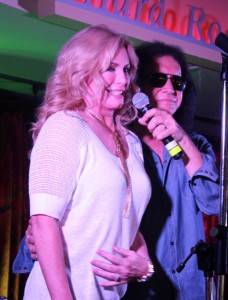