KISS TO SAY FAREWELL TO OZ TOUR TO KICK OFF

Kiss LEDGENS MUSIC BANDS touring by Caroline Russo | on November 6, 2019 | 0 comments | in Uncategorized | Like it 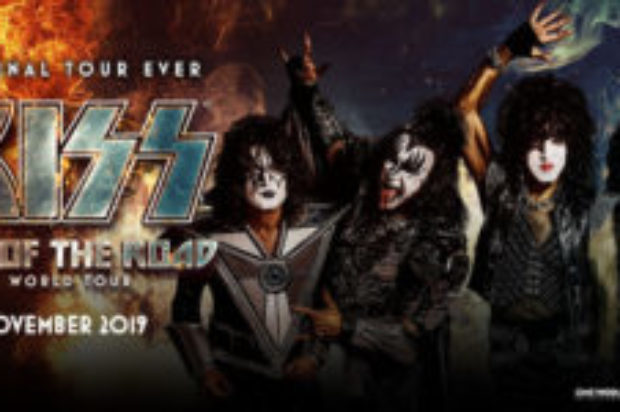 The excitement level of KISS fans is starting to rise, with the rock n roll legends touching down in only four weeks to begin the Australian leg of their farewell world tour.

The spectacular ‘End Of The Road’ tour is undoubtedly the biggest and best KISS show ever, receiving amazing reviews from diehard KISS fans and the media. After sell-out shows through Europe and the US this year, the band are ready to thrill the KISS Army across Australia one last time.

In latest KISS news, to cater for the overwhelming demand, side view tickets have been released for shows in Brisbane, Adelaide and Sydney and are now available from Ticketek.

The recently announced third Rod Laver Arena concert in Melbourne on Saturday November 30 continues to attract KISS fans from around the country, keen to be part of what is set to be an emotional farewell at the band’s final concert on Australian shores.

Fans are also keen to check out the two KISS Penrite Racing Team Supercars, driven by Dave Reynolds and Anton De Pasquale, when they hit the track for the first time at the Gold Coast GC 600 on October 25-27. The cars look spectacular! Check ‘em out here

Today KISS is pleased to announce the support acts for the Australian shows, providing eight Aussie bands a highly sort-after showcase opportunity. They are Legs Electric, The Superjesus, Dallas Crane, Rival Fire, Palace Of The King, The Poor and Dead City Ruins.

The Screaming Jets were previously announced as the special guests at the Supercars Newcastle 500 after-race concert.

Legs Electric summon the spirits of the golden era of heavy rock -’70s blues-based riffs, full-power vocal attacks and live shows worthy of Sunset Strip. In just a few years, the Legs Electric ladies have chiseled their name in stone as one of the most electrifying, must-see bands in their home city of Perth. www.legselectric.com

The Superjesus maintain their reputation as one of our favourite and most respected rock bands. With three great albums, multiple ARIA awards and a recent induction into the South Australian Music Hall Of Fame, the Sarah McLeod-led powerhouse band
Midnight Oil and continue to deliver every time they hit the stage. www.thesuperjesus.com/tour

Since forming in 1996, Dallas Crane have earned their stripes as a staple of Aussie rock music culture and a formidable force in the live music scene. The rockers are no strangers to the big stages, having played alongside The Who, Cold Chisel, Nick Cave & The Bad Seeds to name a few. The multiple-ARIA Award nominees have five albums under their belt and an arsenal of Aussie rock anthems ready to go. www.dallascrane.com.au

Melbourne alt-rock band Rival Fire have just dropped the video for their new single ‘Lost’, a taste of their upcoming highly anticipated debut album. The energetic young four-piece, fronted by vocalist/songwriter Rob Farnham, recently went through a re-building phase, and have returned stronger and more determined than ever.
www.facebook.com/Rivalfireband

2019 saw Dead City Ruins take their powerful live show to European audiences with huge success. It’s planted the seed for an enormous 2020, with the release of a new album plus more headline shows internationally as well as here. Having opened for the likes of Skid Row, Ugly Kid Joe and Wolfmother, Dead City Ruins are ready to rock Rod Laver Arena. www.deadcityruinsofficial.bandcamp.com

Palace Of The King have well and truly earned their reputation as a great live act, with relentless touring both here and abroad for the past five years. With a dedicated fan base and three solid albums under their belts, including 2018’s Get Right With Your Maker, the Melbourne four-piece have had another huge year on the road and are about to unleash album number four. www.palaceofthekingmusic.com

The Poor are back! And continuing to do what they do best, play straight-up great Aussie rock’n’roll. Nothing much has changed since they came screaming out of Darwin in the mid Nineties and that’s just the way their fans like it. www.thepoorband.com

Don’t miss the chance to celebrate the extraordinary career and music of KISS one last time!