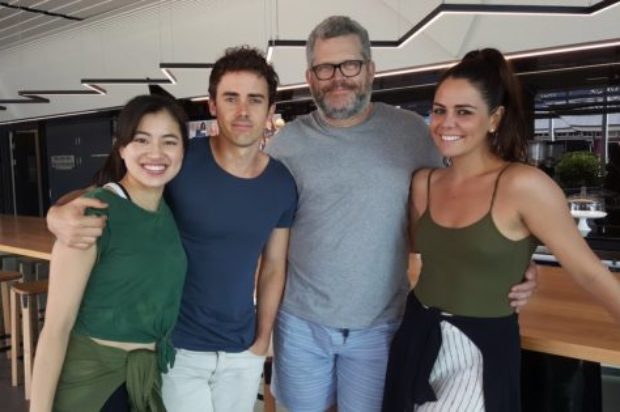 Set against the unforgiving backdrop of the Tasmanian wilds, Dead Devils introduces audiences to the headstrong George (played by rising star and multi-Matilda Award winner Emily Weir in her La Boite debut); an environmental scientist desperate to save the world one Tassie Devil at a time.

Sharing her cramped shack is Harris, a ranger charged with bringing a feral dog plague under control to protect George’s work with the devils. Across one night, two unexpected visitors trigger a series of events that will change the pair’s lives forever.
Fuelled by her own ecoconsciousness, playwright Kathryn Marquet said Dead Devils was written to inspire audiences to think about their relationship with the earth more closely.
“I’m interested in, and deeply saddened by, the way that humanity has responded to the climate crisis,” Marquet said.

“Truth and knowledge is being eroded by political agendas and corporate lobbying, by the democratic-information-sharing platform that is the internet, by a mindset of anti-intellectualism and scepticism of expert knowledge.

“The world seems completely absurd to me: we’re in a burning building and we’re standing around the water coolers looking at Facebook.”

“Dead Devils features wonderfully idiosyncratic characters in an absurdly black and twisted world as they literally bargain for their lives,” Lawson said.
“Its darkly humourous assault on racism, climate change denial, ideologically driven politics and anti- intellectualism will keep audiences laughing and thinking long after visiting the theatre.”
The Dead Devils of Cockle Creek is the first production of La Boite’s trailblazing 2018 season that puts female voices at the heart of a program of new Australian works.
“Marquet has created an absolutely killer new black comedy that has all the ingredients to become an Australian modern classic,” La Boite Artistic Director and CEO Todd MacDonald said.
“With an all-star cast and stellar creative team, audiences can look forward to a truly rollicking night at the theatre.”