LA SOIRÉE OPENS WITH A BANG AT QPAC 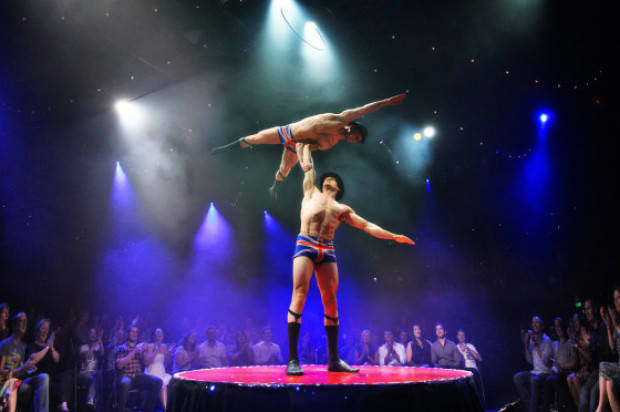 Brisbane will come alive as LA SOIRÉE, the award-winning theatrical phenomenon that has won devotees around the world, kicks off tonight at the Playhouse Queensland Performing Arts Centre (QPAC) for a strictly limited season until 24 May 2015.

Following on from sell out seasons at the Brisbane Festival, LA SOIRÉE celebrates the ten-year anniversary of the troupe’s first show by bringing to QPAC its heady cocktail of cabaret, new burlesque, circus sideshow and contemporary variety that has left audiences around the world spellbound, titillated and amazed.

Transformed into an intimate salon-style circus space, with the audience seated entirely on stage in a variety of ‘posh’, ringside and stalls seating surrounding the action, this is the Playhouse like you’ve never seen it before.

Leave your troubles at the door and be prepared for a night of thrills, shocks, laugher and disbelief as the crème de la crème of the cabaret world take to the stage.

LA SOIRÉE will feature a blistering line-up of new acts making their Brisbane debuts, as well as a number of old favourites returning to celebrate the show’s ten-year anniversary.

But the line up does not stop there, the Brisbane season also features the dynamic Swedish duo David and Fofo who are on a mission to change the world with a ping pong ball, Captain Frodo; the son of a famous Norse magician and famed the world over for bending, contorting and manipulating his body into shapes that are as astonishing as they are unnatural, and finally Montreal’s rollicking, sexy and hilarious puppet feast for adults, Cabaret Decadanse.

Brett Haylock, Creative Producer said that he is truly proud of what an international phenomenon LA SOIRÉE has become.

“Ten years ago when we assembled this rag tag group of fabulous and freaky artists from the edges of society, vaudeville and variety were dirty words.

“Entertainment guides didn’t even have cabaret sections back then. Now you can’t swing a leopard-print bra in London’s West End or Downtown Manhattan without hitting a cabaret artiste who’s at the very top of their game.

“It’s been an incredible experience for our international family of performers to see audiences flock back to the genre and I’m more than a little proud of the role LA SOIRÉE has had in that.

“In excess of 10 million people have seen our show around the globe and it would appear that the general public’s desire for old fashioned entertainment where the performers are working harder than the lights, is stronger than ever,” he said.

Join us on stage in the Playhouse QPAC for a night of delicious, deviant and delirious entertainment, a night unlike anything you have seen before. To book go to qpac.com.au or call 136 246.