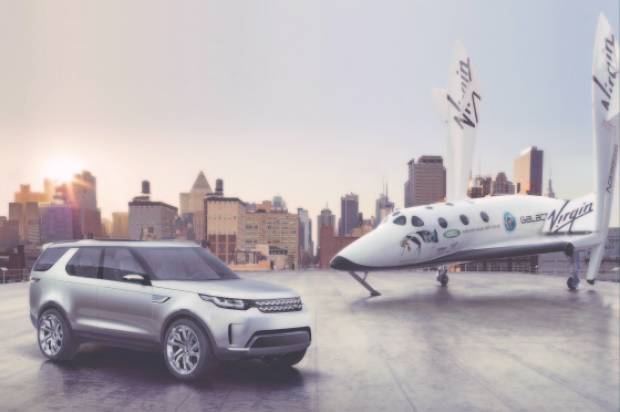 Demonstrating their shared vision of pioneering spirit, technological innovation and sense of adventure, the ground breaking partnership was announced against the backdrop of SpaceShipTwo, the world’s first commercial passenger carrying spacecraft, together with Land Rover’s new Discovery Vision Concept vehicle. The announcement illustrates the commitment that both brands share to iconic design and engineering excellence and a desire to push the boundaries of travel for the next generation.

The partnership will see Land Rover vehicles become part of daily life for the Virgin Galactic team and for all ‘Future Astronauts’, the space experience will now begin with Land Rover as they arrive in New Mexico for training, and continue to the moment they drive from the space terminal building to the waiting spaceship. Land Rover will base a fleet of vehicles at the Virgin Galactic test centre in the Mojave Desert, California and at its astounding operational New Mexico base, Spaceport America.

The exciting announcement was revealed in dramatic fashion on board USS Intrepid, a former aircraft carrier and now a museum dedicated to the exploration of sea, air and space and anchored on the Hudson River. Land Rover’s first act as exclusive partner was to bring a unique full-size replica of SpaceShipTwo VSS Enterprise to New York, where it joined the remarkable British Airways Concorde and its namesake Space Shuttle Enterprise upon the Intrepid. Like the Space Shuttle, SpaceShipTwo is the first of a revolutionary fleet of reusable human spacecraft. Having the vehicles in one place for the first time provided a powerful symbol of human ingenuity and the adventurous spirit of exploration and discovery.

The vehicle uses augmented reality technology to display a ‘see-through’ view of the terrain ahead, making the front of the car ‘virtually’ invisible from inside the cabin. Gesture Control allows you to open the doors, operate the indicators or turn on the headlamps simply by moving your hand, while Laser Referencing projects visible markings, symbols and imagery onto the ground to aid low speed or tricky manoeuvres.

More than 200 VIP guests witnessed the two game-changing vehicles, which were revealed against a stunning Manhattan background and an awe-inspiring projection mapping sequence.

Richard Branson, Founder of Virgin Galactic said “We couldn’t be more delighted to have Land Rover join us on our incredible journey. It is hard to think of a brand which is more synonymous with exploration and adventure. The safety and engineering excellence of Land Rover’s vehicles, which have been the stuff of legend for more than 65 years, are attributes which also lie at the heart of Virgin Galactic. We look forward to crossing the final frontier together and to a long and fruitful partnership.”

Phil Popham, Group Marketing Director of Jaguar Land Rover said “This is a marriage of two of Britain’s most iconic brands which celebrate shared values, a pioneering spirit and a true sense of adventure. Not only do we both share the same long-term vision to enable mankind to explore, but we also want to develop this partnership to inspire others. From our tens of thousands of employees and customers to schools and colleges, motivating more young people to pursue careers in engineering, science, technology and math – and explore new ways of travelling for future generations.

Land Rover’s heart beats ‘above and beyond’ – we are pioneers on land and Virgin Galactic is the pioneer of space. It’s a very special match of brands with a shared vision.”
Both brands run significant and highly regarded community relations and STEM education programmes, which encourage young people to aspire to a future in science, technology, engineering and mathematics and together see the huge potential to develop this partnership to inspire others and motivate more young people to pursue careers in these vitally important fields.

Courtesy of Land Rover, SpaceShipTwo, will remain on display at Intrepid Sea, Air and Space Museum for the public to view between from 15th to the 22nd April. It will sit alongside other game changing artefacts including the first ever space shuttle Enterprise, the prototype NASA orbiter that paved the way for the space shuttle programme and the record-breaking and revolutionary supersonic passenger airliner, the Concorde.

The Discovery Vision Concept will be on display at the New York Auto Show, which opens on Wednesday 16th April.