LAST WEEK FOR LA BOITE: WHEN ONE DOOR OPENS 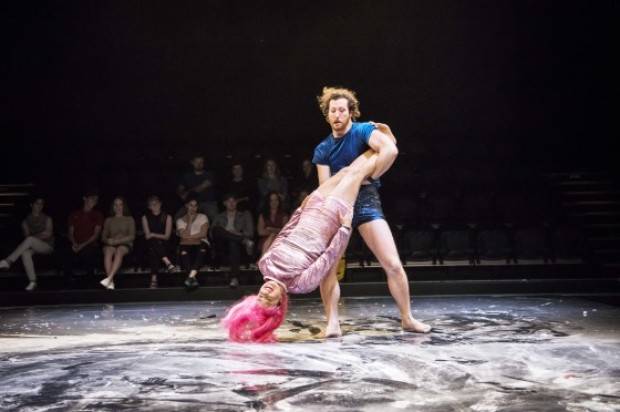 STORIES, WORLDS & BODIES COLLIDE
Last Week must finish on 23rd April 2016
Internationally acclaimed contemporary circus ensemble Circa return to their hometown of Brisbane and join forces with La Boite Theatre Company to create a stunning new show When One Door Closes at the Roundhouse Theatre 6 to 23 April, 2016.
Co-directed by Yaron Lifschitz and Libby McDonnell, When One Door Closes marks the first collaboration between Circa and La Boite. Following the critical success of La Boite’s 2015 Brisbane Festival in-the-round production Prize Fighter, Artistic Director, Todd MacDonald, adds his 360 degree dramaturgic perspective while Sydney-based composer, Oonagh Sherrard, will provide an evocative soundscape for this non-narrative mash-up. When One Door Closes is an exciting new work, combining three turn-of-the-century classics, Henrik Ibsen’s Hedda Gabler and A Doll’s House with August Strindberg’s Miss Julie and circus form. Co- director Libby McDonnell explained “the work celebrates the spirit of three 20th century heroines and imagines them here and now. We are delighted to have the chance to take our circus and communicate with it to a theatre audience.”
“Taking on these great plays from the canon is a big challenge and we’ve worked to keep them true to the essence and DNA of the works while allowing our imaginations to roam” the duo stated.
Presented by La Boite & Circa When One Door Closes Directors Yaron Lifschitz & Libby McDonnell Dramaturg Todd MacDonald
Lighting Designer Jason Organ
Costume Designer Libby McDonnell Composer Oonagh Sherrard Performers Circa Ensemble
WHEN: WHERE: DURATION: TICKETS: BOOKINGS: MORE INFO:
6 – 23 April 2016
La Boite at the Roundhouse Theatre, 6 Musk Ave, Kelvin Grove QLD 4059 60-70mins
$30-$59 + booking fee
www.laboite.com.au or telephone (07) 3007 8600 9am-5pm Mon-Fri Telephone (07) 3007 8600

Susan Hetherington from 612 ABC sums it up perfectly.

“So while my initial reaction to trying to tell classics as a circus was one of skepticism, I was won over. Don’t see this if you expect a retelling of any one or all of these works. It’s not that. It’s more about the essence of the women. It’s about the rough and tumble of life. The juggle. The balancing act. It’s about the days you think you are hanging on only by a thread and the days you think you are about to be hit by a wrecking ball. It’s about times when you are hoisted on the shoulders of friends and days when you are dropped from a great height. It’s funny and sad and sexy.”