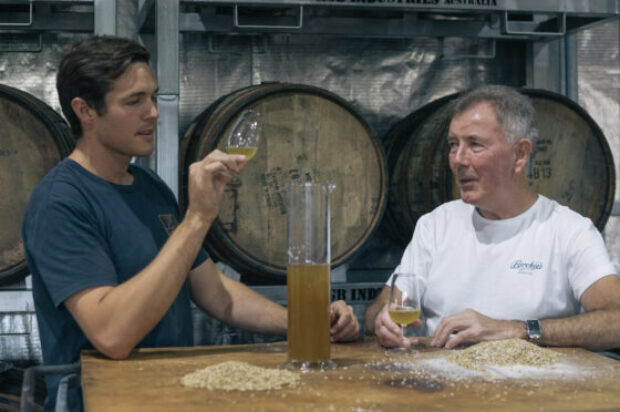 Cape Byron Distillery is proud to announce the exciting release of their first single malt whisky to the Australian public. To honour the occasion, Master Distiller, Co-founder Jim McEwan, along with Co-founder & Distiller Eddie Brook will be celebrating with a series of exclusive whisky events.

The Launch of Cape Byron Australian single malt will be a whisky celebration hosted by Jim McEwan & Eddie Brook to punctuate the highly anticipated release of the first single malt whisky from the Bcorp certified distillery.
The world-renowned master distiller has inspired generations of whisky distillers, blenders and fans through his tenures with Scotland’s Islay distilleries Bowmore, Bruichladdich, Ardnahoe and now Australian distillery Cape Byron in the hinterland of Byron Bay.
Jim has played a pivotal role in the birth of Cape Byron’s new spirit, with his wealth of experience evident in this intriguing new Australian whisky from where the rainforest meets the sea. And now he now shares this legacy with Eddie Brook. “We’re so excited to finally share Cape Byron Single Malt Whisky with Australian whisky fans and to showcase the range in such a meaningful and intimate setting. These events are a whisky lovers dream and Jim McEwan is such an inspiring figure in our industry. For Jim to be able to share not only the story of our distilling journey, but his wealth of knowledge, is something unmissable for the whisky community. We are also going to have a tonne of fun and many laughs, so a night to truly remember!” says Co- founder and distiller, Eddie Brook.
Guests joining the exclusive events can expect a signature Brookie’s G&T on arrival, some witty banter and cheeky tales from the dynamic duo whilst sharing a few drams and priority access to the first bottles of whisky before they are released to the general public.

These events will give attendees the privilege to get their hands around the distillery’s first release before they go on sale online or with any retailers in the country
The event will be showcasing four releases from the distillery including: Cape Byron ‘The Original’ Single Malt Whisky and the ‘Chardonnay Cask’ Single Malt Whisky, an exclusive event only release
The events will be held at the distillery in Byron Bay and various locations in Brisbane, Melbourne and Sydney over August and September.

Limited tickets to the ‘Launch of Cape Byron Whisky: A celebration with Jim McEwan and Eddie Brook’ will cost $85 and are available through the website, capebyrondistillery.com
Events dates and locations: