LEGENDS IN CONCERT AT CROWN CASINO

Concerts TRIBUTE SHOWS WHATS ON by Caroline Russo | on September 21, 2019 | 0 comments | in Listings | Like it LEGENDS IN CONCERT
MELBOURNE AUDIENCES CAN’T GET ENOUGH
OF THIS ACCLAIMED LAS VEGAS SHOW
RETURNING TO MELBOURNE PALMS AT CROWN
FROM JANUARY 9 TO 26, 2020

TICKETS NOW ON SALE
Legends in Concert is the longest running and most popular show in Las Vegas and Melbourne audiences are showing they love this show as much as its Vegas fans.

For the past three years, Legends in Concert has performed in Melbourne with audiences being very vocal on what featured characters they would like to see, and the producers have taken notice. The line-up reflects the fans’ feedback.

Returning by popular demand for a fourth season will be Elvis Presley, along with Johnny Cash, Neil Diamond, Elton John, Village People, Dusty Springfield, Diana Ross and Lady Gaga all for their first time in Legends in Concert’s performances on the Palms stage.

“Legends in Concert is thrilled to be invited back at the Palms with another all-star lineup for what we have no doubt will be the “feel good” show of the summer in Melbourne,” said Mark Kogan, General Manager-Limited Engagements of Legends in Concert.

“The audiences in Melbourne are among the best I have ever seen at any theatrical stage show throughout the world, passionately singing along with the artists and their energy is awesome.” 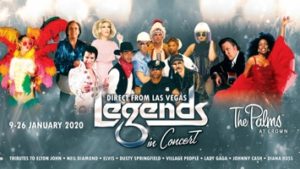 “The January 2020 featured cast will be the second year in a row the fans have chosen the superstars they would most like to see, in addition to fan favorite Elvis Presley, by utilizing our survey”

“Additionally we are pleased for the third year in a row that our line-up will feature a world class Aussie tribute artist, this time Daniel Thompson as Johnny Cash.”

This high energy internationally acclaimed production takes audiences on an electrifying journey through the songbooks of these legendary singers accompanied by a live band and with talented singers, dancers, lavish multimedia theatrical sets and authentic costumes.

The tribute artists perform using only their own natural voices and are backed by a live band that rocks the house with vivacious back-up singers and dancers.

Legends in Concert made its Las Vegas debut in 1983 as an initial six-week engagement in the centre of the Las Vegas Strip. It is the longest-running production in Las Vegas’ history with its flagship show at the historic Tropicana Las Vegas Hotel and Casino. Legends in Concert has entertained over 35 million fans and 2019 marks its 36th anniversary.

Tickets to Legends in Concert at The Palms at Crown Melbourne go on sale July 11 for 20 special performances in January 2020.

Legends in Concert – The Palms at Crown Melbourne
Dates: January 9-26, 2020
Performance Days: Tuesdays through Sundays
Times: 7:30 Tuesdays through Sundays
Special matinee performances on Saturday (January 11th, 18th
and 25th) and Sunday (January 19th) at 2:00pm
Venue: The Palms at Crown, 8 Whiteman St, Southbank
Tickets: www.ticketmaster.com.au or phone 136100.
Prices: Wednesday/Thursday/Sunday Performances $89.90 for VIP seating or $79.90, including the booking fee; $69.90 for all Tuesday Performances and for Friday and Saturday Performances $94.90 for VIP seating or $84.90. All tickets will incur a transaction fee.
Website: www.legendsinconcert.com https://www.crownmelbourne.com.au/entertainment/concerts