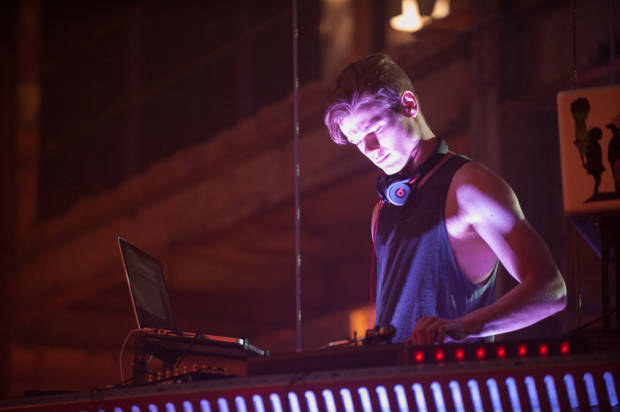 Continuing to bolster its international sales slate as the AFM nears, Lightning Entertainment announced today that it has picked up international sales rights to drama “Bravetown,” starring, Lucas Till (“X-Men: First Class,” “X-Men: Days of Future Past,” “Stoker”), Josh Duhamel (“Transformers” film series, “You’re Not You”), Oscar® nominee Laura Dern (“Jurassic Park,” “The Fault in Our Stars,” “Blue Velvet”), two-time Golden Globe nominee Maria Bello (“Prisoners,” “Payback,” “Secret Widow”), Tom Everett Scott (“That Thing You Do!,” “An American Werewolf in Paris,” “Because I Said So”), and Jae Head (“Hancock,” “The Blind Side,” “Robosapien: Rebooted”). The announcement was made by Lightning Entertainment EVP & General Manager Ken DuBow.

Lightning will be introducing the star-studded film to international buyers for the first time at the upcoming AFM, where it will have its market debut.

In “Bravetown,”Josh (Lucas Till) is perhaps the most prominent DJ in present time at the hottest club in New York City. All the major labels are ready to sign this young man and he’s well on the way to a life of fame and fortune. But after an overdose, being only 17 years of age he is sentenced by the court to live out the rest of his underage years under the custody of his estranged father in the small town of Paragon, North Dakota.

While just trying to ride out the next few months, keeping his head low and living under the radar, Josh meets Mary, captain of the dance team, the worse in the district, the county, and possibly the state. This unexpected encounter derails his plans to stay out of the limelight and keep to himself, as his music mixes inspire the team to competitive success. When ordered by the court to meet with a counselor, Josh begins to discover the depth of his pain and through this, he begins to sympathize with the people of his army town who carry the burden, pain and the loss of their loved ones to the most recent wars in Iraq and Afghanistan. Through the people of this small town, Josh discovers that there are bigger purposes to live than fame and fortune and caring for others opens up a life he never thought could be possible.

Established in 2001 and based in Beverly Hills, CA, Lightning Entertainment is a leading independent entertainment company specializing in the international sales, licensing, representation, marketing and distribution of premier independent content in all available media. With a strong presence at major international film markets and established relationships with key distributors in global territories, Lightning focuses on monetizing superior films theatrically and in ancillary markets including home entertainment, television, emerging media, and video-on-demand & digital platforms. The company represents one of the largest libraries of high-quality pictures in today’s independent marketplace.