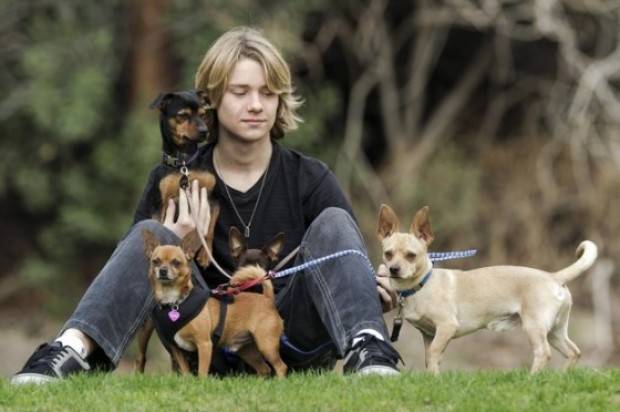 As writer and one of the producers of Snow Moon, Alexandria Altman has a soft spot for this young actor and it is not hard to see why. With his youthful exuberance and full powered passion for all he believes in Lou is the National Youth Ambassador for the American Humane Association and hosted AHAs Young Hollywood For Humanity at the 2013 Hero Dog Awards in Beverly Hills. He received the 2013 Pet Hero Award by Pet Philanthropy Circle in The Hamptons accepting the honor with model Christie Brinkley for their work on behalf of animals, and also serves as a youth spokesperson for ASPCA, Humane Society of the United States, and Subaru of America.

In 2010, Lou founded Kids Against Animal Cruelty (KAAC), an educational foundation for animal rights, rescue and shelter adoption he started at age 14 when he learned millions of animals are put to sleep if not adopted. Today its state chapters run by teens work to lobby against puppy mills, ban shelter gas chambers, save wild Mustangs, and preserve America’s western frontier. He continues lobbying to educate his generation on responsible pet ownership. Lou currently stars in Pass The Light (2013) directed by Malcolm Goodwin and Warrior Showdown directed by TJ Cencula. He has also appeared in the Clint Eastwood film Trouble With the Curve, the hero film Doughboy, A Christmas Tree Miracle, VH-1 Do Something Awards, Modern Family and other film and TV projects. He has been featured in the Washington Post, Huffington Post, ABC News, MSN.com, Breitbart.com, Miami Herald and his photo with his rescue dogs was the number one Yahoo! Photo of the Day. His public service music video ‘1Life2Live’ and his national initiative, ‘Spare Change For Shelter Animals’ continues to raise awareness for millions of animals at overcrowded shelters, and his pop music trio ‘Blonde’ will soon debut ‘Keep The World Spinning’ to help raise awareness for saving wild horses.

When not acting and motivating fellow teens to stand up for change and animal rights, Lou rides horses, is a swordsman, practices parkour and martial arts, studies and writes music. He also manages, in between acting roles and charity work, to attend school and produce public service music videos for the animals. He lives with his family and eight rescue dogs in Burbank, California.