Jess and Matt Louise Adams Sony Music Australia x factor by Caroline Russo | on November 26, 2015 | 0 comments | in Music | Like it SET TO RELEASE THEIR DEBUT SINGLES ON MONDAY NOVEMBER 30TH

Denis Handlin AM, Chairman & CEO Australia & New Zealand and President, Asia, Sony Music Entertainment, commented: “I am delighted to welcome Louise and Jess & Matt into the Sony Music family. They are very special performers with incredible talent and we are excited to be a part of the next phase in their careers.”

Louise describes herself as a late bloomer in the music industry. Before finding music, Louise worked as a lawyer. Blessed with a strong and distinctive voice, her style is an eclectic blend of blues, rock, soul and folk. She has developed a flair for writing original music and lyrics. Hailing from South Australia and currently living in Mount Gambier, this 31-year-old was immediately captivating at The X Factor auditions with a version of Nina Simone’s ‘Feeling Good’.

Jess & Matt have only been making music together for the last 12 months. The 24-year-olds started out as solo artists but became a duo a year ago before impressing audiences at The X Factor auditions with their acoustic version of Vance Joy’s ‘Georgia’. Both hailing from Sydney, NSW, they have each been slogging it out on the pubs and clubs circuit for
  
the last five years, with Jess growing up listening to 70s folk music from the likes of James Taylor and Carole King whilst Matt was influenced by blues and R&B legends such as Stevie Wonder. 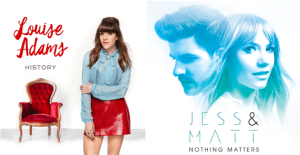