Break out the sequins Brisbane because the official countdown to VELVET REWIRED, the spectacular, high energy disco show starring iconic Australian music legend Marcia Hines, who was recently announced as a guest judge for Australian Idol in 2023, HAS BEGUN!

VELVET REWIRED opens in Brisbane from 16 November and will run for three weeks in the Raine & Horne Wynnum Spiegletent at the Wynnum Fringe, ahead of a season at Sydney Opera House.

With a career spanning five decades, Marcia Hines has released 22 albums and sold 2.6 million copies, garnering countless chart-topping singles and multi-platinum records globally. Inducted into the ARIA Hall of Fame in 2007, Marcia continues to remain one of Australia’s most-loved music artists, and is perfect as The Diva in VELVET REWIRED! 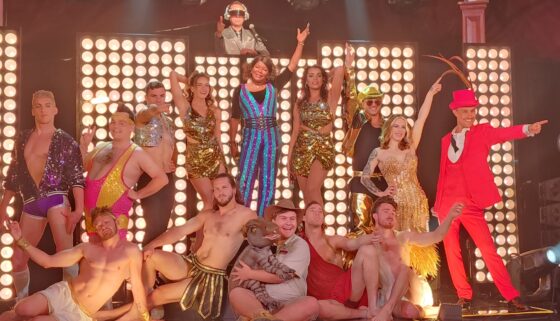 A love letter to DISCO where a cast of internationally acclaimed circus, dance performers and vocalists fuse flawless glamour, glitz and jaw-dropping circus skills, VELVET REWIRED was born in the sequins and discotheque dust of the Adelaide Fringe Festival in 2015. The show features 17 major hit songs that dip deep into the disco psyche and are universal in their joyousness – including If You Could Read My Mind, Born to be Alive, Everybody Dance, Shake Your Groove Thing, It’s Raining Men, Don’t Leave Me This Way, Turn the Beat Around, No More Tears (Enough is Enough), He’s The Greatest Dancer, Boogie Wonderland, Disco Inferno and Boogie Wonderland.

This big, bold, and beautiful production also stars the award-winning performer, musician, composer, music producer and director Joe Accaria as The DJ and the spectacular Craig Reid as Hula Boy. Craig steps onto the stage direct from Las Vegas and a season of Absinthe at Caeser’s Palace and prior to that, the Hamburg season of Velvet, all in 2022.

Stage star Tom Sharah – with a line-up of incredibly enviable musical theatre credits including Muriel’s Wedding, Priscilla Queen of the Desert, Shrek, American Psycho and 9 to 5 – will play Country Mike. Pierre Poissonnet and Stephanie Rijkens are The Skating Willers, and are the third generation of a famous rollerskating legacy. Aerialist Beau Sargent returns to Australia from London for the Australian tour after being awarded the prestigious Bronze Clown from Princess Stephanie of Monaco at New Generation Circus Festival in Monte Carlo and won the European Circus Association Award at the European Circus Festival. Joining Beau in the air is Harley Timmermans, a National Institute of Circus Arts graduate. The Sirens will be played by Jacinta Gulisano, one of Australia’s most exciting vocalists, together with Sasha Lee Saunders, an Australian Institute of Music graduate and cast member of the 2014 tour of Disney’s Aladdin to Australia, New Zealand, and Singapore.

“Inspired by Studio 54, a club famous for its wild parties and hedonism, but also for its cultural acceptance, Velvet Rewired continues the theme of celebration, family, and freedom! Director, Craig Ilott, has reworked his magic to transform this production into a sparkling new vision of dreams, life, and fulfilment,” said Marcia Hines. Long live the discotheque dance floor!