‘Rich’ is the fifth and final song that fans will receive with their HERO iTunes preorder before the album releases to all retail partners on June 3rd through Sony Music Entertainment Australia. In addition to ‘Rich’ as previously announced, fans will also receive songs ‘My Church’, ‘80’s Mercedes’, ‘Drunk Girls Don’t Cry’ and ‘I Wish I Was’, off the album that Billboard credits to being “one of 2016’s most anticipated country releases.”

Alternatively, fans who pre-order via Sanity Online will receive an album signed by Maren herself!
Morris, whose debut single ‘My Church’ was #1 on the Australian Country Airplay chart for 6 weeks during March & April has just received two CMT Award nominations for FEMALE VIDEO OF THE YEAR and BREAKTHROUGH VIDEO OF THE YEAR for her first-ever music video for ‘My Church’ which was shot in her home state of Texas.

Prior receiving the 2016 CMT Music Award nominations ‘My Church’ had set the record for the most chart reporting stations in the US for a debut artist’s first single on the Billboard Country Airplay chart with 107 spinning the song and is the highest charting debut single by a female in Country Aircheck’s Mediabase history. The Country Radio single currently sits inside the top 10 on the Billboard Country Airplay chart.
    
Morris is gearing up to hit the road this summer on Keith Urban’s RipCORD World Tour 2016 beginning June 2 in Kansas City, KS, the day before HERO is available everywhere on June 3rd. 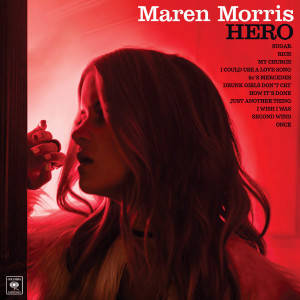 PRE-ORDER A SIGNED COPY OF HERO AT SANITY ONLINE