Chrononauts Comic Book Mark Miller Sean Gordon Murphy by Caroline Russo | on August 7, 2015 | 0 comments | in Whats the Buzz | Like it ‘Chrononauts’ combines the unstoppable comic-book icon Mark Millar and illustrator Sean Gordon Murphy; a guaranteed classic that chronicles man’s first steps through the time-stream, televised for the world to see like man’s first steps on the moon.

Through smash-hit titles such as ‘Wanted’, ‘Kick-Ass’, ‘Kingsman: The Secret Service’, ‘Superman: Red Son’, ‘The Ultimates‘ and ‘Marvel Civil War’, currently being filmed as the third Captain America movie, Mark Millar has redefined the comic-book industry while building his status as an industry legend. After 10 years as one of Marvel’s biggest writers, he works exclusively now for his own company Millarworld, building his brands in print and in cinema with nine different blockbuster franchises currently in production.

His latest release, ‘Chrononauts’, is now available to purchase from September 9th. This is time-travel as it has never been seen before and featuring the artwork of the hottest new talent in the industry at the moment, Sean Gordon Murphy (Punk Rock Jesus). 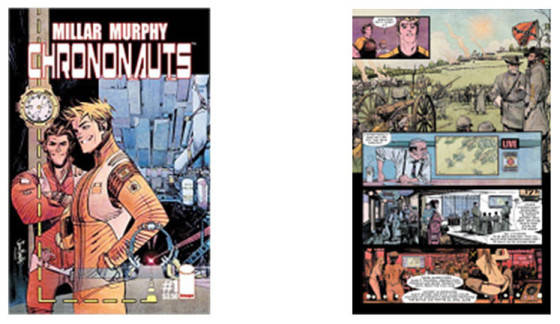 Synopsis:
The story opens with a satellite fired back through time and sending images of the Civil War back to the present day. The world watches, mesmerised, and excited as Dr Corbin Quinn and Dr Danny Reilly embark upon the first manned mission into the past. Their plan is to meet Columbus as he reaches the Americas, but their planned route goes way off-course, leaving them to fend for themselves in an era-hopping adventure from ancient Rome to the Roaring Twenties to the dawn of life itself.

“This is by far the most ambitious project I’ve ever undertaken,” explains Millar. “The actual canvas we’re working on is the entirety of human history so the scope for drama has been amazing. We’ve got things going on here no-one’s ever done before, in comic-books or in cinema. Sean and I are really excited about it.”

Continuing, “I’ve worked with the best in the industry in recent years, but Sean Gordon Murphy beats them all. The research he’s done on this is just astounding. He’s a New York Times best-selling artist for a reason. I can’t think of anyone else who could have pulled this off so well.”

When does Millar plan to make this into a movie like Kingsman and Wanted and Kick-Ass before it?

“Actually, we’re working on it right now. Universal Pictures has bought the rights and we’re making it with Chris Morgan as producer, the brains behind the Fast and the Furious juggernaut over at that company. We’re all really excited about this and getting the screenplay together for a director at the moment”, he adds.

‘Chrononauts’ is due for imminent release. Copies can be pre-ordered now, via Amazon: http://amzn.to/1JRVzLv

His DC Comics work includes the seminal Superman: Red Son, and at Marvel Comics he created The Ultimates – selected by Time magazine as the comic book of the decade, Wolverine: Old Man Logan, and Civil War – the industry’s biggest-selling superhero series in almost two decades. Mark has been an Executive Producer on all his movie adaptations and is currently creative consultant to Fox Studios on their Marvel slate of movies.

Sean Gordon Murphy is a New York Times Bestselling creator of Punk Rock Jesus (DC Comics), as well as an Eisner award winning artist of 2014’s The Wake (also DC). He’s also worked on such characters as Batman, Constantine, and numerous other DC and independent projects. 2014 also saw him collaborating with Christopher Nolan on a short Interstellar comic for Wired Magazine. He lives in Brooklyn, NY with his wife and 2 dogs and dreams of one day living in a larger apartment.