MARTA DUSSELDORP GETS HER TEAL ON AS SHEILA BAUSCH ENTERS WENTWORTH

FOXTEL Marta Dusseldorp PRISION MATES Wentworth by Caroline Russo | on September 20, 2020 | 0 comments | in Entertainment | Like it 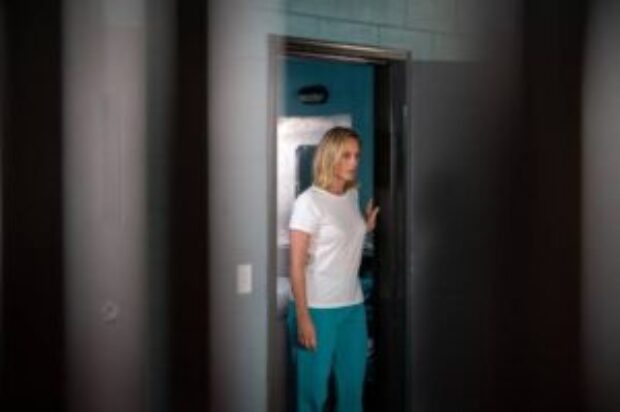 AND SHE IS HERE TO SHAKE THINGS UP!

Tuesdays at 8.30pm on FOX SHOWCASE or watch on demand

The epic final two episodes of the current season of Wentworth herald the highly anticipated arrival of acclaimed Australian actress, Marta Dusseldorp when her character Sheila Bausch enters the Wentworth compound next Tuesday September 22 at 8.30pm on FOX SHOWCASE.

Sheila is charged with multiple counts of murder, but when it is revealed she is part of the True Path cult Lou (Kate Box) and Reb (Zoe Terakes), escaped from, long held secrets threaten to be exposed.

Marta Dusseldorp said: “I jumped at the chance to play the role of Sheila; she is very different to the roles I have played recently. Having always admired Wentworth from afar I am grateful for the opportunity to join this stellar ensemble in its final season”.

Fremantle Director of Scripted Jo Porter said: “Marta’s performances are always so exciting: infusing a sense of danger, intrigue and depth into the roles she plays. We are so proud of the roll call of Australia’s finest Actors that have joined us on Wentworth and thrilled to be able to now add Marta’s name to that list. I know audiences will be as excited as we were to see her pull on the teal to join us playing the mercurial and tortured Sheila Bausch – her performance is of course once again captivating.”
The last episode of the current season of Wentworth will screen Tuesday September 29, 2020, with the final ten episodes airing in 2021.

Watch on FOX SHOWCASE Tuesdays at 8.30pm or anytime on demand
Seasons 1-7 are currently available to stream on demand