#Beers COVID-19 Daniel andrews lock up music release Pubs and beers by Caroline Russo | on November 2, 2020 | 0 comments | in Music | Like it 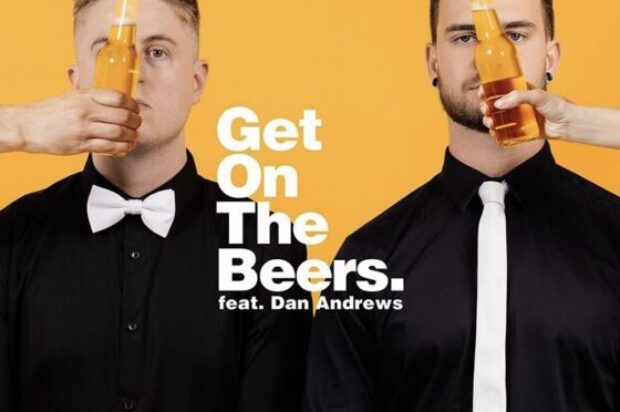 As with the rest of the entertainment industry, COVID-19 meant things came to a halt for Brisbane based, international touring DJ act: Mashd N Kutcher. After 6 years of touring, 2 Platinum records and over 1000 live shows played, the duo saw an entire year of scheduled shows across Australia, Asia, Europe, India and North America cancelled, joining the country in lockdown.

Whilst difficult to collaborate with other musicians and producers, the duo were forced to work with the tools they were given. With Victorian Premier Daniel Andrews (the daily poster-boy for Australian news, during his Press Conference briefings), the duo decided to get those creative juices flowing one night and to remix a press conference for a laugh, sampling the phrase: “Get on The Beers.”

As Pubs and Restaurants (and hopefully soon clubs) now begin to open up around Australia, the momentum is increasing with Mashd N Kutcher’s song being the anthem of choice for pubs around the country to re-open their doors. Melbourne, it’s time ….. to “Get on the Beers!!”
https://www.mashdnkutcher.com/getonthebeers