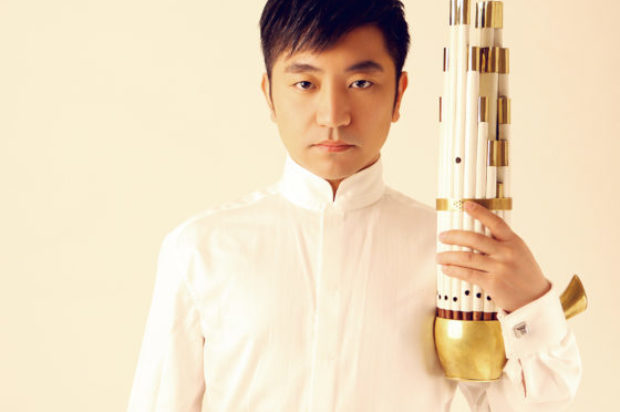 In a stunning coup for Queensland, the Australian Festival of Chamber Music in Townsville will welcome celebrated Chinese musician and master Sheng player Wu Tong in his first ever Australian performance. He joins a lineup of more than 35 internationally acclaimed musicians, including 21 making their Festival debut and five like him, who will perform in this country for the first time.

Wu Tong is one of China’s most successful crossover musicians – he plays the Sheng which has a 3,000-year history in China and resembles a large mouth organ with a free reed and vertical pipes. He is also a member of Yo-Yo Ma’s Slik Road Ensemble and was a member of the first rock band ever to appear on Chinese television!

Wu Tong graduated from the Central Conservatory of Music in 1994 and has appeared as soloist with the New York Philharmonic, London Sinfonietta, Chicago Symphony Orchestra, and Hong Kong Philharmonic Orchestra. He was the 2012 Musician of the Year by New York’s China Institute. In 2013, he premiered Zhao Lin’s Duo, a double concerto written for him and Yo-Yo Ma.

Music has always been in his family, he first started playing the Sheng when he was five years old; he’s the fourth generation in his family to play. His great-grandfather, who lived during the late Qing dynasty, was the first.

On performing at the Australian Festival of Chamber Music, he said was most looking forward to playing with the other world class musicians, sharing his music and collaborating with new sounds. He said Chamber Music was positioned to become an increasingly popular form because of its smaller combinations, it’s ability to be nimble, and its openness to collaborate and take on musical adventures.

Other artists making their Australian debut at the AFCM include Argentina’s JP Jofre (Bandoneon), Lars Anders Tomter (Viola) and Tine Thing Helseth (Trumpet) both from Norway, Katya Apekisheva (Piano) from the UK, and the famed Pavel Fischer (Violin) from the Czech Republic who will perform and direct the Winterschool.

The 28th AFCM, will take place over 10 glorious days from Friday 27th July to Sunday 5th August, featuring more than 25 concerts and 5 special events, including extraordinary concerts on the beach of Orpheus Island and on Magnetic Island, as well as collaborations, conversations and masterclasses performed by the world’s best chamber musicians. The program includes six morning Concert Conversations, five Sunset Series events, seven Evening Series concerts and Winterschool masterclasses and performances. New to 2018 are the Cleveland Bay Supper Club Lounge Concert, the AFCM Up Late event titled The World Comes to Flinders and the AFCM After Party which will be held on Magnetic Island.

The AFCM is famed for its musicality, wintersun, artist accessibility and friendliness.