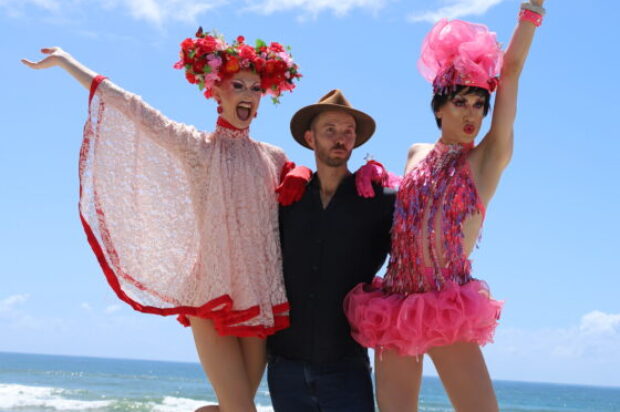 A GOLD Coast theatre production powerhouse is bringing much-loved musical Priscilla: Queen of the Desert to The Star Gold Coast for a 3-week season 16 July – 7 August.

The show is now casting lead roles – and will launch a nationwide search for a transgender woman to play leading lady Bernadette Bassenger – but has already locked in a spot for Australia’s best known transgender individual and famed ‘Queen of the Cross’ Carlotta, who is Gold Coast-based.

This show heralds a new era of expansion for the company founded in the basement of HOTA in 2013, known then as The Arts Centre Gold Coast. Founder Matt Ward revealed MWE is in an exciting growth stage, with RENT, Wicked and Mamma Mia under his belt; Priscilla enroute and a pipeline of hit shows planned across multiple venues until 2026. A worldwide hit, Priscilla marked a pivotal point for the LGBTQIA+ community in 1994, the original film introducing positive representative themes to a mainstream audience. Following three friends across the Australian Outback in a bus they name Priscilla, this is a story of self-discovery, sassiness and acceptance.
Launching a nationwide search to cast leading transgender woman Bernadette, Matt Ward reinforces the need for representative casting in 2022; “it’s an honour to share the story of Bernadette and it’s important to our team to make casting choices that elevate the humanity of her story.”
“Representation is important to us. We welcome artists from all genders, communities, identities, backgrounds, sizes, races and abilities to come forward and audition for this production. No experience necessary, if you’ve ever wanted to sing, dance or act, we’d love to meet you.”
He expressed his excitement to have Australia’s best known transgender individual make her musical debut on Priscilla with the casting of famed entertainment personality, Carlotta; “Carlotta is an icon, with a wealth of knowledge to share with our cast and crew. No one has approached her to be in a musical prior and I am so proud to be her first. We’re so grateful she said yes”

Known to coax arts and musical outsiders into the spotlight, he has high hopes for I’m A Celebrity intruder and Gold Coaster David Subritzky who is out of the jungle and auditioning for Priscilla: “We’ve been very fortunate to convert social influencers with no singing or dancing experience into theatre stars in previous productions”.
Local Hot Tomato Radio Announcer Emily Jade O’Keeffe is also auditioning for a role: “started vocal lessons at Matt Ward Vocal Studio prior to landing a lead role in Mamma Mia!” With a goal to source local talent, creatives and artists to form cast and crew, Mr Ward anticipates more than 80 individuals to be employed during the Priscilla period.
Directed by Helpmann Award nominee Trevor Ashley, and founding musical cast member: “ Priscilla is a story of tolerance and acceptance, a celebration of LGBTQIA+ culture, as well as Australian culture. That never goes out of style.”
Choreographed by internationally renowned Anthony Ikin: “It’s an Australian story and Aussies always get behind our creations. Diversity and acceptance is a big topic of today. This show celebrates that.”

With musical direction by the acclaimed David Piper, this show will have you shaking your groove thing, featuring nonstop dance-floor classics like ‘It’s Raining Men’, ‘I Will Survive’, ‘I Love The Nightlife’ and many more.

Priscilla Queen of the Desert runs from 16 July – 7 August, THE STAR GOLD COAST
Tickets available now at www.ticketek.com.au | for more info on the show www.priscillamusical.com.au Tickets start from $75.00.