BRISBANE Matthew Mitcham Olympic Twists and Turns by Caroline Russo | on January 14, 2015 | 0 comments | in Theatre | Like it

Olympic gold medallist diver Matthew Mitcham has wowed with his performance at the pool, however, in February he will be swapping the 10m platform for a stage to inspire Brisbane audiences with his much acclaimed cabaret show, Twists and Turns.

Through theatre and song with his beloved ukulele, Matthew shares the twists and turns of his incredible life, including overcoming drug-addiction, his climb to gold-medal fame in Beijing and coming out as gay. Based on his book of the same name, and told with honesty and courage, the cabaret performance of Twists and Turns is an inspiring story of a true champion. 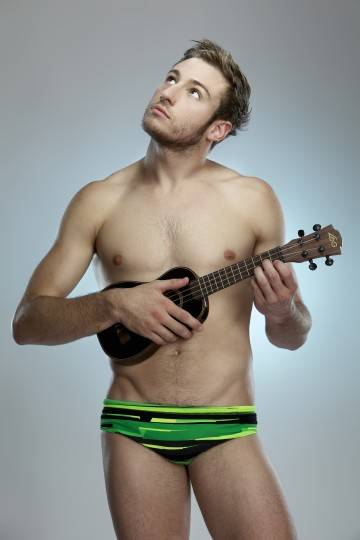 On 23 August, 2008, Matthew made Olympic history. Coming from 30 points behind, and on his final dive, he scored 112.10 to shock himself and the diving world and rob the Chinese of a full sweep of Olympic diving gold medals. On that day Matthew Mitcham OAM became Australia’s first male diving Olympic gold medallist since 1924, and the only diver ever in Olympic history, to produce a perfect 10 point score from all judges – winning the 2008 Beijing Olympics 10m platform title.

Grinning with pride from front pages around the world, there was no hint of the personal demons that had led this supremely talented young dynamo to quit diving less than two years before his famous win at Beijing.

Joyously out and proud as an openly gay man, Matthew was a role model for his courage in and out of the pool. Yet the crippling self-doubt and shadow of depression that plagued him all his life forced him into premature retirement, at one point reduced to circus diving to earn money.

Even after Beijing and being ranked No 1 in the world, those closest to Matthew could not guess that beneath that cheeky, fun-loving, exterior he was painfully aware of how easily it could unravel.

Matthew recently released his autobiography Twists and Turns, which reveals a life behind the international spotlight that has been plagued by low self-esteem, anxiety and depression, panic attacks and repeated self-harm as a teenager, leading to drug abuse. He also struggled with issues relating to his sexuality, being one of few Olympians to compete at the event as openly gay.

Commissioned and produced by the Melbourne Cabaret Festival and directed by the contemporary hot-property young Director, Nigel Turner-Carroll, this extraordinary cabaret show has been scripted by multi-award winning UK cabaret performer Spanky under the musical direction of Jeremy Brennan (Jersey Boys). It had its world premiere in February 2014 at the Perth Fringe Festival, where it won the Best Cabaret award.