Mega Masterplan for The Star Gold Coast To Inject 2 Billion

MASTERPLAN ONE BILLION THE STAR CASINO by Caroline Russo | on November 2, 2018 | 0 comments | in Daily News and Updates | Like it State Government approval of a mega masterplan for The Star Gold Coast could see The Star Entertainment Group and its partners inject more than $2 billion in additional tourism investment across South East Queensland (SEQ). 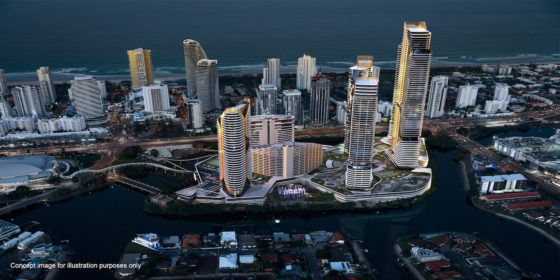 Managing Director and CEO of The Star Entertainment Group, Matt Bekier, today welcomed the Premier’s announcement of Government support for its future vision at the Gold Coast.
“The masterplan in its entirety would see The Star Gold Coast boast more tourism accommodation than any other resort in Australia.” Mr Bekier said.
“The 3000 hotel rooms and apartments would also exceed what the world-renowned Marina Bay Sands in Singapore offers, and be on a scale to compare with the largest integrated resorts in Las Vegas.”

Along with four additional towers including more hotels, the $2 billion-plus expanded masterplan proposed by The Star and its Hong Kong-based partners, Chow Tai Fook and Far East Consortium, includes the following:

The Star has also committed to delivering these tourism investments with no extra poker machines.
The first phase of the overall masterplan’s five new towers was approved in December 2016 and is currently under construction. The Dorsett hotel and apartments tower is planned for a 2022 completion.

The latest approval from the Palaszczuk Government allows for the full expanded masterplan, which consists of an additional $2 billion-plus investment in a further four towers and associated resort facilities on Broadbeach Island.

Mr Bekier said the latest segment of the masterplan is over and above the already-committed multi-billion-dollar investments from the consortium partners into SEQ.
“Once the Queen’s Wharf Brisbane transformation is complete, and if The Star Gold Coast masterplan is rolled out in full, we will have tourism assets across SEQ worth around $9 billion,” Mr Bekier said.

“This includes the original assets on the Gold Coast and Brisbane, and the considerable and ongoing investments we have made in both those destinations.”

The tourism investments include:
• The Queen’s Wharf Brisbane development, where an expanded design has led to the recent
announcement of an additional $600 million injected into the project;
• The March 2018 completion of The Star Gold Coast redevelopment and the pre-Commonwealth
Games opening of the luxury all-suite The Darling hotel;
• The 2017 purchase of The Sheraton Grand Mirage Resort at The Spit on the Gold Coast; and
• The new Dorsett Hotel and The Star Residences tower now under construction on the Gold Coast.
“We are delighted to receive the State Government’s approval of our expanded masterplan,” Mr Bekier said.
“Our site at Broadbeach is the perfect location for continued development of tourism assets that will deliver
to the Gold Coast an integrated resort capable of competing with the best on a domestic, regional and global basis. “This would be a project of incredible scale, delivering substantial economic benefit to the State from jobs and increased tourism visitation.

“In addition to The Star Grand, The Darling and The Dorsett hotel tower, our expanded masterplan provides the opportunity for another four towers and world-class facilities.
“They would include a stunning recreational deck, water features and hero pools, a quality day spa, new dining precincts, more bars and cafes, exciting entertainment facilities, plus a nightclub where international acts can be showcased.

“The masterplan also looks at ways to enhance the connection of Broadbeach Island with Pacific Fair, the Gold Coast Convention Centre and the surrounding Broadbeach precinct.”
A phased approach is proposed for the development of the additional four towers and facilities.
“Our vision is to be Australia’s leading integrated resort company and our plans for the Gold Coast are completely aligned with that positioning,” Mr Bekier said.

“We are excited about the tourism forecasts we are seeing for the Gold Coast and much-needed new
infrastructure will deliver a resort of true international appeal.
“The Star can deliver that without the need for any additional poker machines. That is our stake in the ground, the commitment we stand by.
“At the same time, our ability to proceed with the masterplan will ultimately depend on market and competitor conditions at the appropriate time, given the significance of such an investment.” 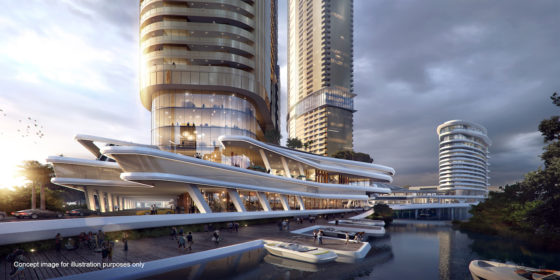