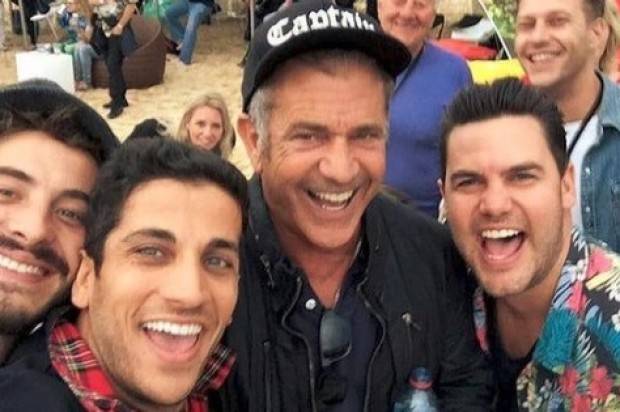 MEL GIBSON IN GOOD SPRITS ON SET FOR HACKSAW RIDGE.

Director of his new film Hacksaw Ridge took time out to have a fun pic with fellow actors … Ryan Corr, Firass Dirani, and Ben Mingay who are currently working with Gibson and what a great line up of some of Australia rising talent.

It is reported that there has been some delays due to weather as to the shooting of what is a true story WWII American Army Medic Desmond T. Doss, who served during the Battle of Okinawa, refuses to kill people and becomes the first Conscientious Objector in American history to be awarded the Congressional Medal of Honor.

The film has some big stars in Sydney NSW that have been casted with Vince Vaughn, Andrew Garfield, and our own star power Rachel Griffiths, Sam Worthington,Hugo Weaving, Richard Roxburgh are some of our talents

It has been so far Nine weeks of shooting, Hacksaw Ridge is due to wrap in the second week of December. The film was reported to have been shot in Queensland first up, but was secured by the state government with a attractive funding put towards the budget that been quoted at 55 Mil. It is expected to finish shooting in middle december and will be released in 2016 in USA later in the year. Hacksaw Ridge will mark Gibson’s first directorial effort as the last one was in 2006 for Apocalypto where he was in the limelight for being arrested and his meltdown at the times and rants he did.