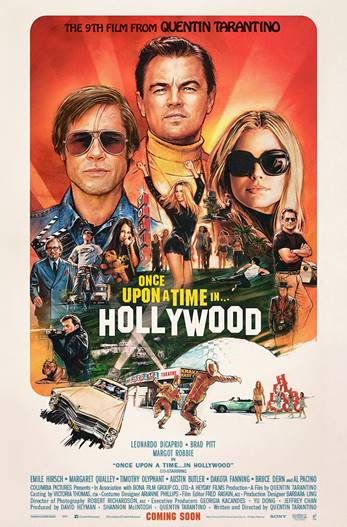 Celebrating its 68th year, the Melbourne International Film Festival (MIFF) today unveiled its 2019 program – the largest in its history. Featuring 259 feature films, 123 shorts and 16 virtual reality experiences, MIFF 2019 will include 31 world premieres and 160 Australian premieres over 18 electrifying days of cinema.

“I am absolutely thrilled to share my first festival with Melbourne in 2019. Rich in its diversity, this program is a true celebration of cinema: promising countless adventures into the kinds of places and people, ideas and experiences that you won’t find at your local multiplex. With titles from 78 countries, MIFF 2019 gives you the world on film; and as one of the world’s largest showcases of Australian filmmaking, it’s a chance for audiences to celebrate our own stories, too.”

In a coup for the festival, MIFF will be the first place that Melburnians can watch the year’s most anticipated film – Quentin Tarantino’s Once Upon a Time…in Hollywood – as it premieres on the festival’s opening weekend.

A love letter to, and elegy for, the Golden Age of American movie-making, as well as a long overdue feature double bill for Leonardo DiCaprio and Brad Pitt, Once Upon a Time…in Hollywood sees the pair co-starring as ageing TV actor and wannabe movie star Rick Dalton (DiCaprio) and his stunt double/driver/best friend Cliff Booth (Pitt).

Featuring a brilliant supporting cast that includes Australia’s Margot Robbie and Damon Herriman, alongside Al Pacino, Kurt Russell, Timothy Olyphant, Dakota Fanning, Damien Lewis, and Luke Perry (in his final big-screen role), Once Upon a Time…in Hollywood will screen on 35mm at the iconic Astor Theatre to make the most of its stunning celluloid texture.

Having already announced three of its four Gala event films – including the opening night screening of the extraordinary Adam Goodes documentary, The Australian Dream – the festival will conclude with the Closing Night Gala screening of director Lulu Wang’s acclaimed The Farewell.

Recipient of the Sundance Institute’s Vanguard Award in honour of its innovation, originality and independent spirit, The Farewell expands upon a true story Wang previously revealed on NPR’s This American Life. Based on an actual lie, the film follows Chinese-born, US-raised Billi (Awkwafina), who returns to Changchun to find that although the whole family knows its beloved matriarch, Nai Nai, has been given mere weeks to live, they’ve decided to keep Nai Nai in the dark about it. Funny, heart-warming and achingly honest, The Farewell is both deeply heartfelt and delightfully wry.

MIFF 2019 offers audiences the chance to see, hear and experience cinema like never before thanks to a diverse program that goes beyond the big screen to include captivating cross pollinations with iconic names from the music world and a dedicated virtual reality program along with an investigation into the impact of the online sphere on humans; a timely focus on films that explore the environmental concerns of our age; a movie marathon dedicated to Jeff Goldblum; and much, much more.