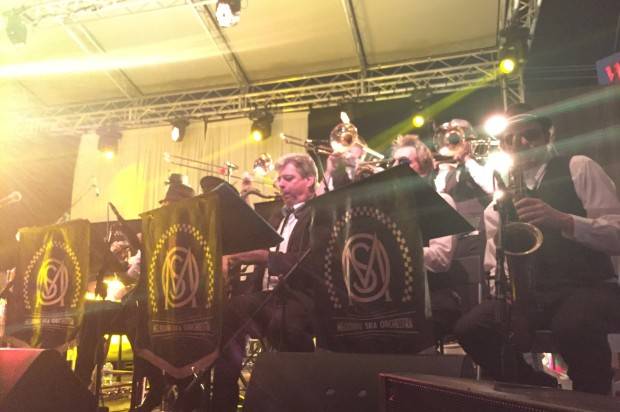 Last night at The Night Quarter on the Gold Coast, Melbourne Ska Orchestra presented their new baby to the world: their new album ‘Sierra-Kilo-Alpha’. They kicked off their ‘Sierra-Kilo-Alpha’ national tour last night and they have a long road ahead. Just by looking at the stage before the set it was evident that the audience were in for a treat. The numerous chairs, music stands, instruments and microphones were all signs that this performance was going to be larger than life.

As soon as the Melbourne Ska Orchestra takes the stage, by following a lead singer with a flag and a megaphone, the audience erupts in cheers and excitement. The front of stage instantly turned into a sea of fedora’s and bodies as a mosh pit was formed. The band rushed to their instruments and gave it all they had, nothing in tune before exploding into a harmonious song that everyone danced to.

After introducing themselves they presented their new album to the audience which had only come out yesterday. This is the band’s first work in three years and has the extra special touch of being 3D. The CD comes with bonus 3D glasses to experience the out-of-this-world album in the right way. This 3D feature was demonstrated onstage by the band with all of the humour and silliness to get everyone smiling; if they weren’t already. MSO are known for performing with up to 30 members at a time on stage, and last night was no different. With 6 saxophones, a flute, 3 trombones, 3 trumpets, a tambourine man, multiple percussionists, 2 keyboardists, bass guitar, a drum kit, a clarinet and everyone in the band singing along, it was like being hit with an amazing wall of sound.

The high energy levels did not stop all night and audience interaction was encouraged. Call and response was used between the band and the audience and a prize for the best dancer got everyone in the mood. Each song was as big and brilliant as the last and there was no time to catch your breath. The audience did not stop moving all night as did the band.

The feel of a Melbourne Ska Orchestra show is unbelievably unique. It is fun and light-hearted while still being all about the amazing music that these people create. The music reflects the band which rubs off on the crowd so everyone is having an amazing time. 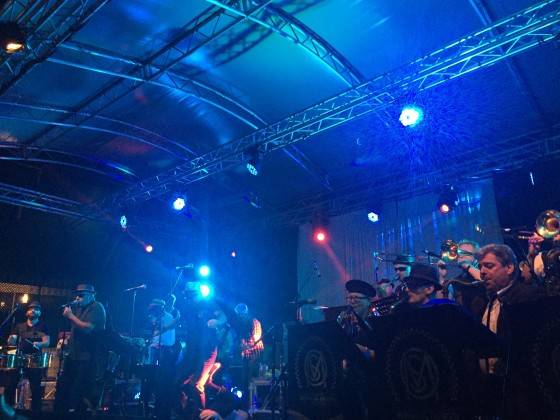 MSO played a few classic hits and introduced their music seamlessly. Every song different from the last but still very much MSO. From the very first second of the performance the whole venue was moving. The cheers and singing and laughter did not stop all night.

The band has said “We like to raise the vibrations of an audience via the musical journey we are presenting. The orchestra palette is wide so there are many dynamic musical adventures to explore. Sore feet from dancing; sore cheeks from smiling too much!” and that is what they did.

The Melbourne Ska Orchestra are currently on their national tour. For dates go to: http://www.melbourneskaorchestra.com/shows/

And read our interview with the band here: https://hushhushbiz.com/interview-with-melbourne-ska-orchestra/