MICHAEL BALL AND ALFIE BOE ARRIVE IN AUSTRALIA NEXT WEEK, TOGETHER

live nation MICHAEL BALL AND ALFIE BOE music gigs touring by Caroline Russo | on September 27, 2017 | 0 comments | in Entertainment | Like it 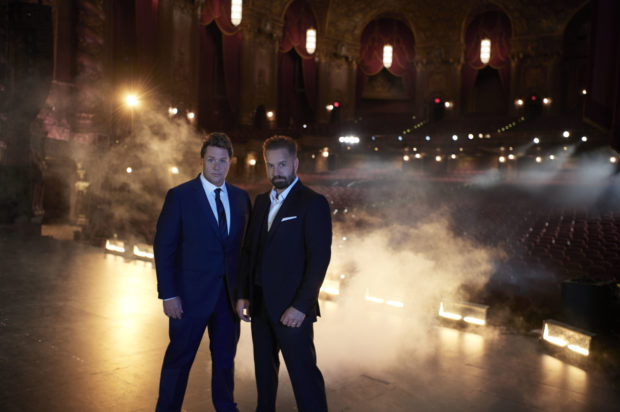 MICHAEL BALL AND ALFIE BOE ARRIVE IN AUSTRALIA NEXT WEEK, TOGETHER

“The pairing of Alfie Boe and Michael Ball is, it goes without saying, an absolute must for fans of pop opera or musical theatre” – The Telegraph

“A Match Made in Heaven” – The Sunday Mirror

“From the first note to the last, Ball & Boe were outstanding” – Huffington Post

Musical theatre legends MICHAEL BALL and ALFIE BOE arrive in Australia next week to begin the national tour of their concert Together. The first performance is in Brisbane on Thursday 5 October, with Melbourne, Sydney, Adelaide and Perth following.

Following the phenomenal success of their double-platinum selling Christmas #1 UK album, Together and major sold out tours of the UK, Live Nation is producing their first Australian tour. Ball and Boe are two of the most cherished performers in the UK, with two of the greatest voices. Between them, this legend of musical theatre and Britain’s most popular and best-selling tenor, a favourite of the Royals, have achieved accolades and triumphs galore.

Together is an unprecedented vocal and musical treat and features some of the biggest hits of all-time, a cherry-picked selection of personal favourites from film, theatre, the Great American Songbook and even pop; songs such as ‘Music of the Night’ from The Phantom of the Opera, Les Miserables Suite, ‘A Wonderful World/Over The Rainbow’, ‘When You Wish Upon A Star’ and ‘You’ll Never Walk Alone’.

Having first met ten years ago performing together in Kismet at the London Coliseum, the stars became lifelong friends. That same year, Michael Ball made history as the first musical theatre star to be given a solo concert at the Royal Albert Hall’s BBC Proms, and asked Alfie Boe to join him to perform at the classical music festival. Their instant camaraderie and professional mutual admiration made for the perfect pairing and, to the delight of their hundreds of thousands of fans across the globe, came to fruition when they released Together. The album’s success is a testament to the popularity and talent of the UK’s finest voices.

Don’t miss this unique opportunity to hear two of the greatest voices in the world share the success of their smash-hit album, Together.