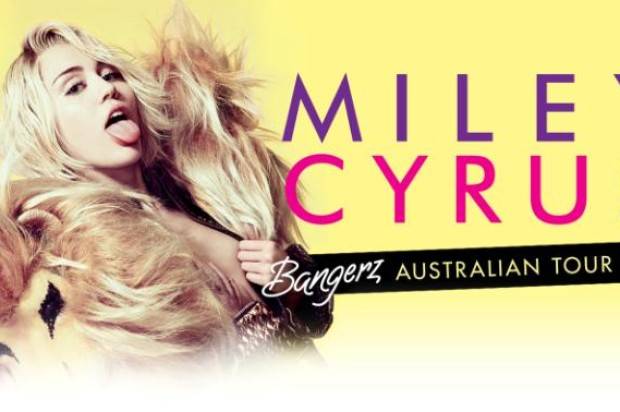 The most talked about artist on the planet!
MILEY CYRUS
BANGERZ TOUR
AUSTRALIAN DATES CONFIRMED FOR THIS OCTOBER

Dainty Group announced today that global superstar Miley Cyrus will bring her BANGERZ TOUR to Australia in October this year.

A Dainty Group pre-sale will commence on Friday 20th June with all details available at www.daintygroup.com, with tickets going on sale to the general public on Monday 23rd June from ticketek.com.au. Tickets will be priced at $99.90 and $149.90 plus booking fees where applicable. To register for the pre-sale, sign up at Daintygroup.com/VIP.

The BANGERZ TOUR has been getting rave reviews in the US:

“GRADE: A / SHE BANGZ: MILEY’S MAD TOUR KICKOFF – So went the brain-sizzling opening date of her new tour as pop’s most wickedly joyous artist prodded the limits of her recently reinvented self… She sold a fresh teen idol the old-fashioned way: dazzling her audience, even when she was just singing her heart out.” Entertainment Weekly

“8 MOST OUTRAGEOUS MOMENTS OF MILEY CYRUS’ ‘BANGERZ’ SHOW – Miley Cyrus kicked off her much-hyped Bangerz world tour with both her immense talent and self-deprecation intact. Cyrus delivered fantastic vocals all evening long. It was a cavalcade of sparkling onesies, the likes of which are only otherwise seen at world championship skating competitions. She appeared to be the most organically inspired and seemed to be having the most fun. Without question, she proved that talent beyond any doubt. She nailed her vocals throughout the entertaining evening.” Rolling Stone

“MILEY LAUNCHES TOUR IN VANCOUVER WITH SASS, SHOWMANSHIP – She belted out the songs like a diva with a grudge… she can hit those notes and hold them, and many of the songs showcase this brilliantly… Cyrus has the charisma and maybe the smarts to be the post-Madonna Madonna. She can use her sexuality and mock it; she recognizes talent in others; she might even have the sixth sense of knowing where the culture is going, or where it can be taken. She also seems approachable, on- and off-stage, in a way that Madonna never did. At the moment at least, no one is better at being Miley Cyrus than Miley Cyrus.” USA Today

Miley’s latest album Bangerz debuted at #1 on both the Billboard Top 200 Album chart and the Digital Album Charts. Additionally, during release week, Bangerz hit #1 on iTunes in over 70 countries. Both singles, “Wrecking Ball” and “We Can’t Stop”, off Bangerz have already sold 4.3 million copies in the U.S. alone. “Wrecking Ball” hit #1 on the Billboard Hot 100 and stayed there for two weeks. It became Miley’s first Billboard Hot 100 #1 and her fastest-flying top 10 on Radio Songs.

In Australia Bangerz is a # 1 album and has achieved massive success with the singles “Wrecking Ball” currently certified Quadruple Platinum and “We Can’t Stop” Triple Platinum.