documentary film film review life MINDING THE GAP skate by Caroline Russo | on March 12, 2019 | 0 comments | in Entertainment | Like it 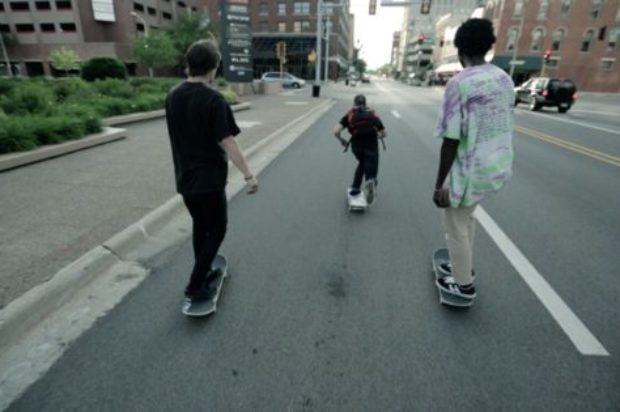 The new documentary film, ‘Minding the Gap’ from the filmmaker Bing Liu is a 93-minute eye-opening, genre-changing masterpiece.

‘Minding the Gap’ visually presents itself like many skate/stunt films that have come before it but takes that format and pushes it further, giving a more personal look into the lives of its subjects whilst presenting a core message. It revolves primarily around the lives of two young men (as well as their families) in Rockford, Illinois as they process the events from their past as well as prepare themselves for the future. The film also cleverly uses its location by presenting audio clips relevant to the topic from various news reports discussing the location.

The story of the film was extremely personal to director Bing Liu who uses themes he directly identified with as well as using a setting he was familiar with. Bing got his start in the film industry by working in the crew of various productions including the 2013 Dennis Quaid and Heather Morris film ‘At Any Price‘. He is currently working on a documentary focusing on gun violence in Chicago as well as being a segment director for the Starz documentary, ‘America to Me’.

The participants in this documentary leave themselves very open and vulnerable during the course of the filming. The subjects of this film are all going through different stages of their lives and have very different immediate challenges and obstacles yet the themes that are a core focus of the film are clearly visible in each of their lives in one way or another. Zack Mulligan has repeatedly been cast in a film that shares similar themes to those he represents in this documentary.

This film is an eye-opening look at a friend group, a town and ultimately society as a whole. I highly recommend finding a screening of this film as it’s message is important and well represented in a way that has not been tackled by films of this genre that have come before. It is hard to talk about the impactful message of this film in detail without depriving you of the full viewing experience. That being said I do highly recommend it as it is impactful and has messages and themes that would connect with a wide audience.