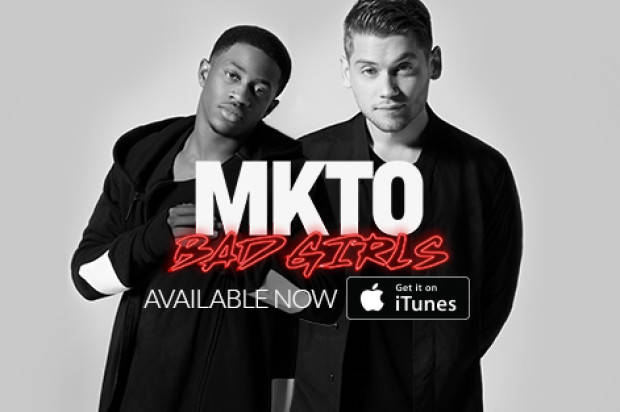 “With Tony Oller’s slick falsetto and horn-filled production, this single feels destined to storm the charts.” – People Magazine
MKTO returns with their funk intact with the brand new single ‘Bad Girls’ – available to purchase now. The duo premiered the track on Good Morning America today, check out the performance here. They’ll also have their late night television debut on the Late Late Show With James Corden on CBS on June 4th.

The sizzling video for the new track will premiere on VEVO on June 5th, and was helmed by acclaimed director Hannah Lux Davis, who has guided videos for Arianna Grande, Nicki Minaj, Lil Wayne, and others. The song is the opening salvo from their forthcoming sophomore album due to be released later this year.

MKTO exploded onto the scene in 2013 with their debut single ‘Thank You’ reaching #2 in the Australian ARIA Charts, achieving 4 x Platinum sales, and a top 5 radio hit. The duo went on to release their self-titled debut album which debuted at #1 on the ARIA charts. Propelled by the smash single ‘Classic’, which is certified 2 x Platinum in the U.S. and -3 x Platinum in Australia, MKTO embarked on their first-ever headlining Australian tour last year drawing rave reviews. Excited about the buzz already attached to ‘Bad Girls’, (they performed a sneak-peek of the song at this year’s Billboard Music Awards Red Carpet Pre-Show in Las Vegas) MKTO elaborated about the song to interviewers at the Billboard bash: “We’re pumped up about it. We had a lot of fun with this song, but we’ve also grown a lot this past couple of years and have a lot more to talk about in our music. There is some great instrumentation behind us on this new one that we think fans will also be excited about.”

Los Angeles duo MKTO are comprised of Tony Oller and Malcolm Kelly. The actors, whose credits include Malcolm starring in ABC’s LOST and Antoine Fisher and Tony in the feature film The Purge, met on the set of Teen Nick’s Gigantic in 2010. The duo immediately bonded over their passion for music and were signed with songwriters/producers Eman and Evan “Kidd” Bogart (Beyonce, Ne-Yo, Rihanna) who inked them a deal to Columbia Records and began executive producing their self-titled debut album, released in April of 2014.
   
MKTO has amassed over 1.5 million record sales worldwide.