Dare Devils Jam Wheelies Monster Trucks truckies by Caroline Russo | on May 23, 2016 | 0 comments | in Entertainment | Like it 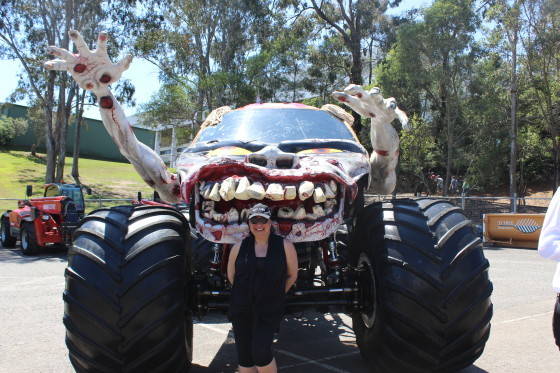 Fans of big trucks and high-powered vehicles rejoice – Monster Jam® is heading back to Australia in 2016, with up to five brand new trucks and drivers and even more super-charged moto-tainment providing a unique sensory experience like no other, and BRISBANE is the first city in the country to welcome the spectacular show!

General public tickets for the world’s premier of Monster Jam – Expect the Unexpected are set to go on sale TOMORROW, Monday 23 May 2016, with fans able to witness jaw-dropping displays of punishing stunts across seven shows in five major cities. With three out of four cities sold-out last year, Monster Jam is back and bigger than ever. The show will feature four unique Monster Jam driver competitions – Monster Jam Wheelies, Racing, Donuts and the coveted Freestyle competitions, with the Freestyle Motocross and Quad Wars also set to return.

Each city will also host one Party in the Pits ahead of a show, where fans can get up close with their favourite Monster Jam trucks, before meeting the superstar drivers.

The 2016 lineup includes a number of fan favourites, with ‘Grave Digger’, ‘Monster Mutt Dalmatian’ and ‘Max-D’ back to tear up the track, alongside new additions ‘Alien Invasion’, ‘Pirates Curse’ and the yellow ‘El Toro Loco’.

Standing nearly four metres tall and four metres wide, Monster Jam trucks are custom-designed machines that weigh around 5,500kgs. Built for short, high powered bursts of speed, the powerful Monster Jam® beasts perform breathtaking stunts and can accelerate from 0-100kph in under 3 seconds. They literally fly – covering up to 50m in a single leap (a distance greater than 14 cars side by side) and up to 12m skywards.

Kicking off on October 1, full dates and show locations are as follows:

Tickets for Brisbane visit Ticketmaster:
www.Ticketmaster.com.au/MonsterJam or call 136 100.
With over 170,000 tickets sold nationwide last year, Monster Jam fans are encouraged to purchase their tickets early to avoid missing out.