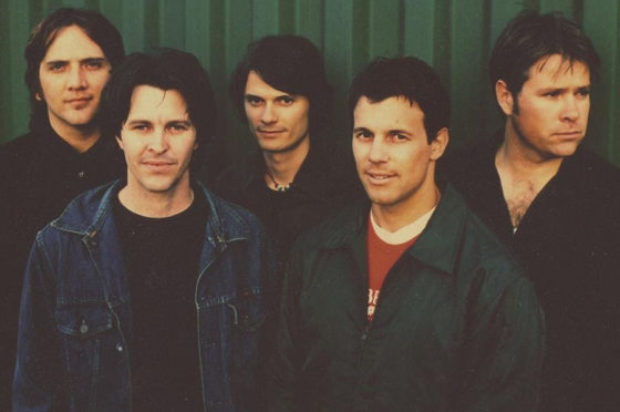 The original 13 track album will be expanded to 35 tracks, including a triple j Live At The Wireless session from 12th October 1998 (never before available commercially), all B-sides from the album (available digitally for the first time), alongside previously unreleased demos including the never before heard track Feels Like Something – listen here. Digging deep into the vaults and lifted from the Internationalist demo recording sessions, the slow-burn structure, quiet/loud dynamic and cascading crescendo of this demo make it unmistakably of its time. Tracked, recorded and mixed in the bands own studio by Darren Middleton and Ian Haug. The Deluxe Edition will be available on 2LP purple vinyl, 2CD Deluxe and digitally.

1998 was a landmark year for Powderfinger. Two years prior, their Double Allergicalbum provided a breakthrough to Powderfinger’s career. It occupied 10 weeks in the ARIA top ten, eventually achieving triple-platinum. Buoyed by the singles Pick You Up, Living Type and DAF, all were in the upper echelons of the triple J Hottest 100 of 1996. Internationalist, the band’s third album, was released on September 7th 1998 and immediately hit the #1 spot on the ARIA chart, spending six weeks in the Top Ten. It was the album that cemented the band as the force that they became and holds a very special place in the hearts and music collections of hundreds of thousands of fans.

Recorded at Melbourne’s Sing Sing studios, Internationalist was produced by Nick DiDia, (the first outing in a long-standing relationship) whom the band credit strongly for finding the Powderfinger ‘sound’. ‘We probably can’t overstate the influence Nick had on helping us define this album, and three subsequent. We tracked the main body of the album in a few weeks and we were all gobsmacked at how good he’d got it all to sound. We had made great sounding records before, but this was ALIVE. It was leaping out of the speakers when we mixed it’.
The first single from the album came in the form of The Day You Come, which was released a month prior to the album, with its down tempo arrangement in tangent to what would make up the rest of the album. The second single was the double sucker-punch of Don’t Wanna Be Left Out/Good Day Ray followed by Already Gone. The fourth single, Passenger, was released 11 months after the album and immediately propelled it back into the Top Ten for another 12 weeks. Internationalist spent 101 weeks in the ARIA Top 50, one of only two Australian albums to have achieved over 100 weeks in the Top 50. The album enjoys a peerless legacy 20 years on, having forged a path of both critical acclaim and commercial success, as well as being highly cherished by fans.

At the ARIA awards in 1999 Internationalist took home the awards for Album of the Year, Best Rock Album and Best Cover Art (by Kevin Wilkins), and The Day You Come won Single of the Year. Passenger was nominated for three additional categories the following year.

The 20th Anniversary Deluxe Edition of Internationalist will be released on Friday October 12th across a variety of formats.
The Deluxe Edition vinyl is spread over 2LP’s and is pressed on luscious 180 gram purple vinyl and features the original album on the first LP, alongside the full Live At The Wireless Session, alongside selected B-Sides and rarities on the second LP (25 tracks in all). It’s housed in a gatefold sleeve and features new liner notes from the band on the inner sleeve, alongside unseen photos and memorabilia from the time.
The 2CD Deluxe edition features 35 tracks: the original album, full Live At The Wireless session, all B-Sides from the era and demos. (35 tracks in all). This edition is packaged a ‘fan-deluxe’ set with 32 page book featuring new liner notes, lyrics and unseen photos from the time.

The standard vinyl version is pressed on 180 gram black vinyl and features the original tracklist.

The full 35 track Deluxe Edition will be available on all digital services from release date.
All formats, with special bundles are available for pre-order from the Powderfinger store here.

The announcement of the 20th Anniversary of Internationalist is welcome news for fans lamenting Powderfinger’s disbandment in November 2010, their final show taking place in their hometown of Brisbane on 13th November 2010 after 21 years, seven studio albums, millions of album sales and hundreds of tour dates in their rear-view.