MUSIC BY THE SEA REVIEW: JAALEEKAAY

Jaaleekaay jackie smith music by the sea Music Review Review by Caroline Russo | on March 6, 2016 | 0 comments | in Music | Like it 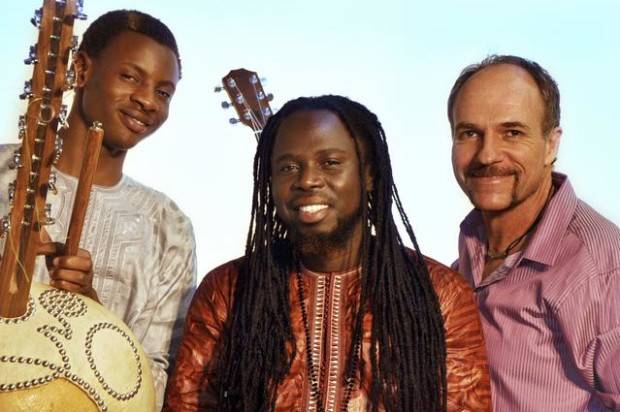 Australian guitarist Steve Berry was working in an Aboriginal community when a friend offered him the chance to go to Gambia. Whilst there he met Yusupha Ngum and Amadon Suso, with whom he formed Jaaleekaay, a group hell bent on bringing the culture of Gambia to the forefront of world music.

Jaaleekaay are a young band, first formed only a few years ago. Their first Australian tour in 2013 and 2014 saw them perform to massive crowds at the likes of Woodford Folk Festival, Port Fairy Folk Festival and Brunswick Music Festival, and receive high acclaim. With an aim to increase their following, they appeared as guests of Music By The Sea on March 5th 2016.

There is no denying the talent possessed by Jaaleekay’s members. Berry’s musical career has included working with some of the industry’s greatest acts and he continues to expand his love of music through his work with disadvantaged communities throughout the nation. Yusupha Ngum and Amadon Suso both have music in their blood. The former is a talented vocalist, according to Berry, for whom fans flock to the airport when they find he has returned home – as well as being the son of African music’s superstar, Musa Ngum, whilst the latter is a direct descendent of Kora Musa Suso, the man responsible for the instrument he now plays so skilfully 760 years after its invention.

Together they create a sound that is uniquely their own, heavy on storytelling and improvisation. Though the crowd was a little lighter on than that of previous Music By The Sea performances, there was no doubting the energy and influence of these musicians as they were swept up in the cultural education provided by this inspiring group.

It is difficult to pick highlights of the night, such was the variety and talent provided by Jaaleekaay. Be it the song of a Gambian mother wishing for a better future for her young daughter, or Crossing Point – they all had moments of brilliance, and it is these moments of brilliance that for me were the standouts. Ngum’s voice is killer as he sings with a power that captivates. The sweet, honeyed vocal mixed with a rich timbre is something one cannot ignore. The obvious leader of the group, he commanded the audience’s attention and held them in the palm of his hand until the very last note was sung.

Berry and Suso dazzled as they teased beautiful music from their instruments of choice. My favourite moments were the ones in which Berry and Suso duelled, creating a musical sensation that seemed to never end. So too, Suso’s solo was a high point as he played an incredible improvisation that encouraged an eager audience’s participation.

Jaaleekaay’s debut at Music By The Sea was one to be remembered. I have no doubt they will become regulars on the organiser’s billing and are set to increase their fan base by ten-fold.

In April, Music By The Sea will host the world premiere of Elena Kats-Chernin’s Sandgate Piano Sonata, as performed by Tamara-Anna Cislowska. For ticketing information, visit: http://www.musicbythesea.com.au/ .