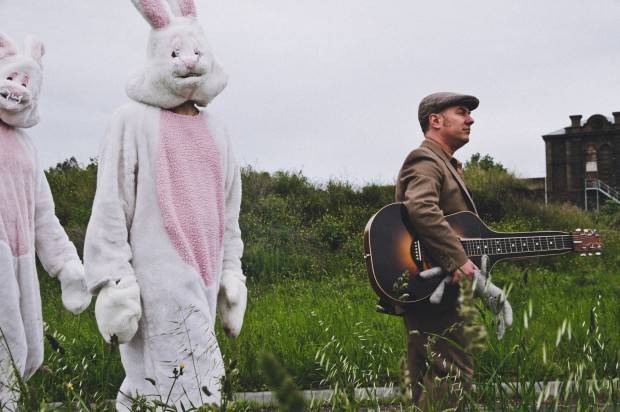 Guitarist Jeff Lang raised the roof when he performed as part of Music by the Sea’s Concert Series at Sandgate Town Hall on July 5th 2015.

Jeff Lang is perhaps one of Australia’s most well-regarded guitarists, receiving endless praise for his skill with the guitar and his ability to fuse the blues, rock and folk genres to create his own unique sound. With 15 albums to his name, he has been nominated and won countless awards, including the Aria for Best Blues and Roots album in 2012 for Carried in Mind, and Rhythm Magazine’s Album of the Year for the same release.

Lang wasted no time in proving to a captivated audience why he is worthy of such high praise when he brought his self-proclaimed ‘disturbed folk rock’ to the local community. His set list had the audience tapping their feet as he played tunes from his latest album I Live In My Head A Lot These Days, including I Want to Run But My Legs Won’t Stand, People Will Break Your Heart and Waiting for the Headlights Through the Blinds, complete with rousing solos that sent the audience into a frenzy. 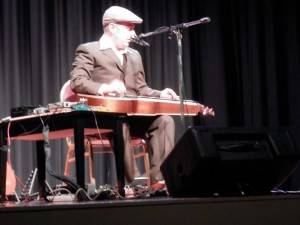 Having grown up listening to my father’s music collection and becoming enraptured with the likes of Eric Clapton, Jimi Hendrix, and more recently John Mayer, I am something of a sucker for a good guitar player. To call Lang that would be an understatement; he is a master. For a solo musician, it can be a little difficult to replicate the richer sound one hears on a recording, when they are perhaps joined by other musicians or given time to record different instruments before the final production is pieced together. Lang did this with ease, playing various types of guitars throughout the evening to perfection, while he recorded his own backing on a host of gadgets beside him, further enhancing his live show. He showed that there is more to playing a guitar than sitting and strumming, as he teased out sounds I didn’t even know the instrument was capable of making.

Though Lang’s command of the guitar is undeniable, his song writing ability must also be praised. At heart, he is a storyteller, weaving tales of mystery and intrigue into his songs. As a writer, I was captivated by the lyrical beauty his work possesses, be it the story of a man beaten up in the backstreets of a foreign country (as in Watch Me Go) or the heartbreaking tale of a woman forced into prostitution in order to care for her child (Five Letters, from Lang’s earlier album Half Seas Over). These were highlights for me. 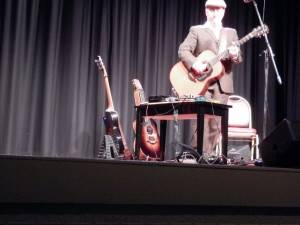 Once again, the folks at Music by the Sea have delivered in presenting another remarkable artist. If you’re a music lover, you’ll be disappointed if you don’t get to see Jeff Lang in concert at one point in time. To see him in action is to truly be in the presence of greatness.