MUSIC MONDAYS WHATS OUT AND NEW

The Whitlams’ new single from their forthcoming album is the rollicking three-minute “(You’re Making Me Feel Like I’m) 50 Again”- a reflection on life and love that will shave years off your age. From the playful Van Halen keyboard stabs and the 70s guitar hooks to the chorus lyrics, this is The Whitlams at their rocking and playful best.

They are known for their hugely successful ballads, but The Whitlams also have a high-energy side which has made them one of Australia’s most successful live acts. The upcoming 46 show national tour in August and September is nearly sold out (7th show in Melbourne, and 8th show in Brisbane on sale now).

“(You’re Making Me Feel Like I’m) 50 Again” immediately takes its place next to their light-hearted, feel-good classics “I Make Hamburgers”, “Thank You (for loving me at my worst)” and “You Sound Like Louis Burdett”. Whimsy, with romance and cynicism included, of course.

The track was recorded in Byron Bay and Sydney by Daniel Denholm (“Blow Up the Pokies”) and mixed in Austin, Texas by Tim Palmer. InboxSurrey-based Asad Khan (aka Khanvict) is an escape artist. His love for lush strings, cinematic swells, and a West Coast bass music punch instantly transport the listener – conjuring visions of desert expanses and dense jungle paradises. The inspiration behind ‘Escape’, Khanvict’s second EP, originated early in the pandemic. Deep in lockdown in Surrey, BC, Asad began a series of weekly livestreams on Twitch which he titled ‘Escape’. These free flowing sessions, attracting up to 2,500 viewers on Friday nights, spoke to the collective need for an escape. An escape from the lockdown. An escape from the fear and uncertainty. An escape into a feeling of freedom through music.

In that, ‘Escape’ is the most personal and sophisticated Khanvict effort to date. The pandemic was a time of intense creativity and gestation for him, and that is evidenced in the attention to detail paid to production, arrangement, and song writing. Impedance, featuring celebrated violinist Raaginder (LA), brings to mind the minimal desert soundscapes of Zhu. While ‘Heavy’, the first single on the album, is reminiscent of the bass driven wobble of Clozee or Troyboi.

This year has been a big year for Khanvict, hiting his first million streams on Spotify. His recent release, the politically charged ’Closer’, has racked up 500K plays on YouTube and garnered global press from Rolling Stone to Times of India to The Hindu. The short film supporting the song was a collaboration involving filmmaker Anjali Nayar, model / activist Seema Hari and a hauntingly beautiful exploration of issues of colorism, casteism and misogyny in South Asian culture. His first EP on Vancouver-based label Snakes x Ladders, Kahani, saw great traction and led to an opportunity to release 2 official remixes of legendary Bollywood composer AR Rahman of Slumdog Millionaire fame. Recent singles have received support from Bobby Friction (BBC), Spotify, and Sony Music India.

The song that defined a generation, in a film that made Kevin Bacon a household name and became an anthem in 1984, is back with a vengeance thanks to Martial Simon. Let’s Hear It For The Boy is Tring Radio’s breakout tune of 2021. First played on the EDM Show with Chris Allen, Martial’s track quickly gathered pace and by popular demand of our listeners became Tring Radio’s record of the week for 3rd – 9th May 2021. Tring Radio is the fastest growing radio station in the South East of the UK and Martial’s feel good banger kept us rocking through the lockdown. – Chris Allen, Host of The EDM Show 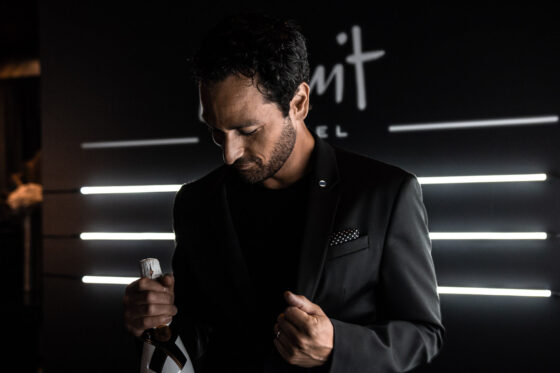 Martial Simon, previously known as DJ Martial, has released his second single “Let’s Hear It For The Boy” cementing his emerging role as producer and GET SET Records label owner.

The infectious cover debuted on Hollywood Hamilton’s RT30 show on 4.17.21, which is syndicated on iHeart Radio over 150+ stations across North America.

Martial Simon spent quarantine pivoting from working as both a DJ and booking agent, to focusing on his production career and launching his own label. The New York-based artist spent the last two decades performing across the country under his DJ Martial moniker, and has been profiled in outlets like Page 6, Daily News, US Weekly, and Wall Street Journal. “Let’s Hear It For The Boy” is out now via his newly-minted label GET SET Records, which Simon founded as a new avenue to showcase music he believes in. Instead of securing bookings for DJs as their agent, Simon will continue championing talented artists by signing them under the wing of his own brand. Check out a quote from Simon below.

My music taste really drove the purpose of this song. I love old records; but also, I’m a huge fan of today’s music scene, and that was the vision for “Let’s Hear It for the Boy.” What developed is an energetic dance cover of the #1 billboard hit from 1984 (in the movie “Footloose”) that’s infused with 2021-style sound. By focusing on strong vocals and a catchy beat, I aimed to stay true to the original while making it blend into today’s music culture.” — Martial Simon