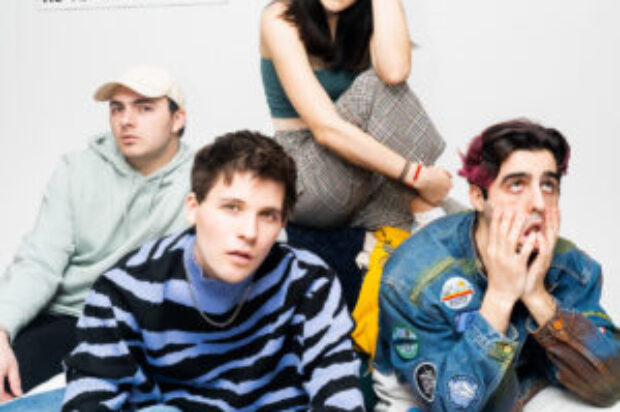 VALLEY have released “nevermind,” the first single since they released their debut LP MAYBE in September of 2019. The first glimpse of what’s to come from in 2020, the pop-leaning banger juxtaposes vivid lyrical imagery that address struggling with feelings of idle and synth-drenched hooks, built to spiral around headphones.

VALLEY have always raised their voice to remind fans that they’re not alone during dark times. As the band maneuver their own growth, they can be found candidly speaking openly about finding positives in life developments and working through mental health issues.

This connection with their fans helped the indie-rock ensemble of friends has increasingly built an organic buzz. With only a pair of self-written, self-produced, debut releases under their belt (including their EP This Room Is White and full-length MAYBE), the band has collected nearly 42 million streams on Spotify alone, a 2020 JUNO Award Nomination, support slots with Lennon Stella and The Band Camino on sold out North American tours in 2019, and a confirmed support billing with LovelyTheBand once the tour world reopens.

Lead singer Rob Laska explains, “I feel like with Valley we’ve always strived for the perfect happy and sad song. ‘nevermind’ is a direct representation of playing with that idea. The song covers a stricter mental health narrative but also leaves the listener room to feel high energy production-simultaneously processing a topic about trying to find an emotion that doesn’t really exist.”

Mixed by Josh Gudwin (Justin Bieber), Karah James (vocals/drums) illustrates “nevermind” as “a song about the cyclical feelings of self-pity, apathy, and being an introvert. It describes wavering between a romanticized version of your life and the ’sa d’ reality of it.” While Mickey Brandolino (guitar) continues “We always have so much to do and as creatives have constant bursts of motivation and many lows as well. We happened to find motivation to write a song about the lows, which is ironic in itself.” And Alex Dimauro (bass) recaps, “nevermind is a song that melodically and lyrically summarizes a feeling felt throughout much of our generation. It’s like throwing on an episode of a show that revolves around one plot: constantly looking for the next best thing.”