memorabilia national film sound rare footage in film Skippy TV SHOWS OF PAST by Caroline Russo | on June 4, 2019 | 0 comments | in arts | Like it 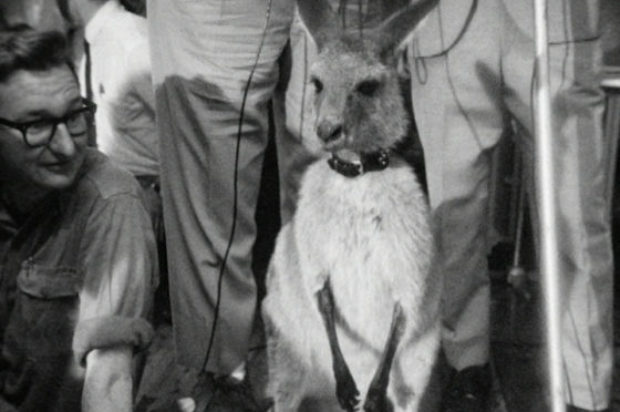 National Film and Sound Archive launches a tribute to Skippy, the bush kangaroo that conquered the world 50 years ago, showcasing memorabilia and rare footage.

The National Film and Sound Archive of Australia has published a new online exhibition dedicated to Skippy, the Australian television show that screened in 128 countries to an audience of over 300 million people at the height of its popularity in 1969. The online tribute, available at https://www.nfsa.gov.au/skippy, includes clips showcasing Skippy’s amazing skills, the show’s celebrity guests, memorabilia and other rare items from the NFSA collection.

Skippy was produced by Fauna Productions between 1966 and 1969, with a total of 91 episodes and a feature film, Skippy and the Intruders. The family-oriented program told the adventures of Sonny Hammond (Garry Pankhurst) and Skippy the bush kangaroo in Waratah National Park. The main cast included Head Ranger Matt Hammond (Ed Devereaux), Mark Hammond (Ken James), Clancy Merrick (Liza Goddard) and Flight Ranger Jerry King (Tony Bonner). The show captured the world’s imagination, and its stars were mobbed wherever they went!

Skippy’s ability to communicate with humans was legendary. Her unique ‘tch tch tch’ sound could mean everything from a simple ‘Yes’ to ‘Sonny’s trapped down a well and I need you to fetch the helicopter, so we can rescue him right now!’. Her paws were also incredibly talented: Skippy could open doors and locks, play musical instruments, untie knots, and much more.

Highlights of the online exhibition include:
• Compilations of clips showing Skippy’s most remarkable skills, and the series’ focus on caring for the environment.
• Skippy guest stars including Frank Thring, Jack Thompson, Jeanie Drynan, Michael Caton, John Meillon, Maggie Dence, Bill Hunter, Chips Rafferty, Barry Crocker and more.
• Interviews with co-creator John McCallum and members of the cast.
• Memorabilia and TV commercials proving that Skippy was everywhere at the time – from a toy tea set to breakfast cereal.
• Rare silent footage of the cast, shot to test the new Techniscope film stock in preparation for the Skippy film.
• The original guidelines for the series scriptwriters, outlining the basic story requirements for all episodes, and the taboos that should be avoided.

The Skippy online exhibition is available indefinitely, worldwide, on the NFSA website: NFSA.gov.au/skippy.
Two additional collections with extra content can be explored at NFSA.gov.au/collection/curated.