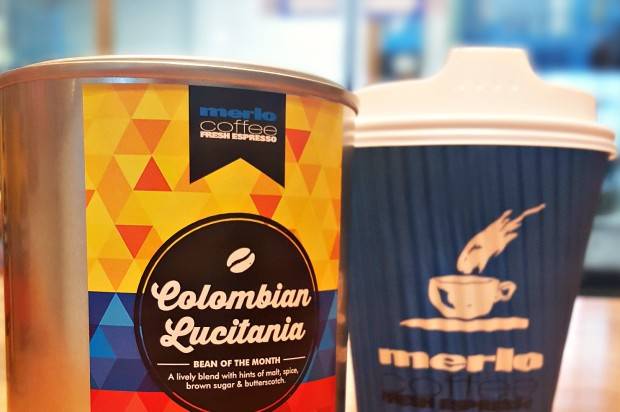 After exclusively importing over one tonne of the multi award-winning Cup of Excellence Colombian bean for the December ‘bean of the month’,
Merlo has been rushed by coffee lovers.
After 10 days, only 100kg of the beans remain, setting a new record.

Queensland-headquartered Merlo Coffee has the exclusive global supply of the Cup of Excellence Colombian bean for December, grown on the Lucitania farm in the heart of Colombia. The privately owned farm has been perfecting their beans for over 20 years, and is certified by the Rainforest Alliance, Fairtrade International and UTZ, a program for sustainable farming. This year in the Cup of Excellence Awards, the Lucitania beans scored 85.5/100, beating hundreds from around the globe to achieve the required and celebrated level of excellence.

Merlo CEO Mr James Wilkinson said the company has worked hard to secure the exclusivity deal, and that coffee drinkers had responded accordingly!

“Our Bean of the Month program showcases beans that are hard to find, rare and interesting, and each December we aim to unveil a fitting end of the year finale bean – and the Columbian Cup of Excellence Bean is indeed this finale,” he said. “This new record for sales is testament to the ongoing maturation of Australia’s coffee palate – our coffee drinkers our educated, passionate and keen to try new tastes and flavours.”

Grown by Víctor Félix Ibarra Fajardo, the Colombian bean is naturally processed, producing a taste that is malt and brown sugar with smooth butterscotch notes, finished with a twang of spice and coconut. The acidity is lively and orange with a round body, and sweet finish. Since 2010 Victor has participated in the Cup of Excellence awards, going through four exhibitions in total. The Cup of Excellence is a prestigious award given only to the finest quality coffee and is staged by the Alliance for Coffee Excellence (ACE).

The remaining beans are available at Merlo’s 14 stores across Brisbane and online.

Established in 1992, MERLO is now Australia’s largest independently owned and operated coffee roaster and today owns and operates 14 of its own cafes and supplies freshly roasted coffee to over 1,000 cafes and restaurants (i.e. wholesale) around Australia. Merlo also ships coffee online to customers throughout the country and overseas. Merlo is proudly Queensland-based.