arts arts in brisbane design Minister for the Arts Leeanne Enoch QPAC Queensland Government theatre works qld by Caroline Russo | on May 15, 2019 | 0 comments | in arts | Like it 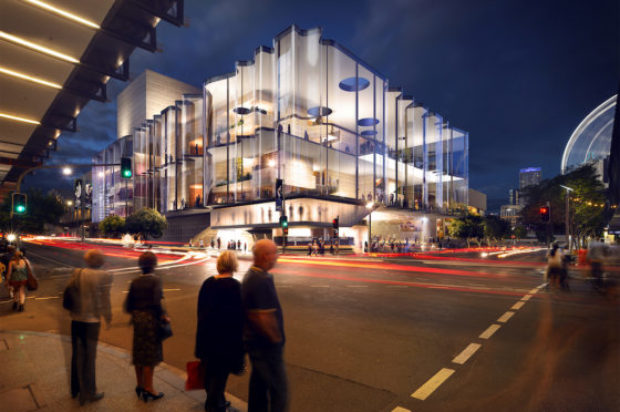 Just short of a year since the announcement was made about a new $150 million theatre to be constructed at Queensland Performing Arts Centre (QPAC), the successful Principal Consultant with a concept design for the new theatre was today unveiled by the Hon. Annastacia Palaszczuk MP, Queensland Premier and Minister for Trade, the Hon. Jackie Trad, Deputy Premier, Treasurer and Minister for Aboriginal and Torres Strait Islander Partnerships, and the Hon. Leeanne Enoch, Minister for Environment and the Great Barrier Reef, Minister for Science and Minister for the Arts.

QPAC Chair, Professor Peter Coaldrake AO, and Chief Executive John Kotzas acknowledged the unveilling as a significant day for QPAC and the performing arts in Queensland.

“The $125 million contribution by the Queensland Government to the Centre’s fifth theatre venue is considerable. I thank the Premier, Deputy Premier and the Arts Minister for this investment in the future of QPAC and the future of live performance in this state”, said Professor Coaldrake.

QPAC Chief Executive John Kotzas highlighted the project as a rare opportunity to reimagine the future.

“At QPAC, we have big and bold ambitions. The new performing arts venue, and this design, are integral to us achieving them.

“It was of most importance to QPAC that the selected design envisioned a state-of-the-art venue, one that was welcoming, accessible and connected, and a theatre with the technical capacity to better share live performance experiences across Queensland. It was a place that grows with the aspirations of QPAC, the expectations of audiences and visitors, and the creative ambitions of performing artists and practitioners well into the future.

“What’s also important was how the new theatre connects QPAC today with the QPAC of tomorrow. This includes growing our capability to broaden the impact and reach of live performance in this state, including through digital means.

Professor Coaldrake and Mr Kotzas thanked all the design consultant teams for their submissions and congratulated Blight Rayner + Snøhetta. They said they look forward to working with them on the next phase of the project.